It has been one month since the beginning of 2020. Time passes more quickly than we have imaged. Athough some new 5G smartphones have been released during the past month, there are not so many sales of the new phones and the benchmark data of them are insufficient. Therefore, the first list of the global top 10 best performing Android phones are still dominated by 4G flagship processors, and there are no major changes in the ranking of this month.

Today Antutu releases the list of the global Top 10 best performing Android phones for January based on the data collected from Antutu database. Who will be the king of performance in January？ Let’s take a look at the rankings below.

As usual, we have included separate lists for flagship phones and mid-range phones. The rankings of the smartphones are more likely to depend on the SoCs powering them.

The data are collected between January 1, 2020 to January 31, 2020. The list consists of Android devices that have at least 1,000 units running Antutu benchmark V8, and the scores are averaged across all devices, making the results more representative. 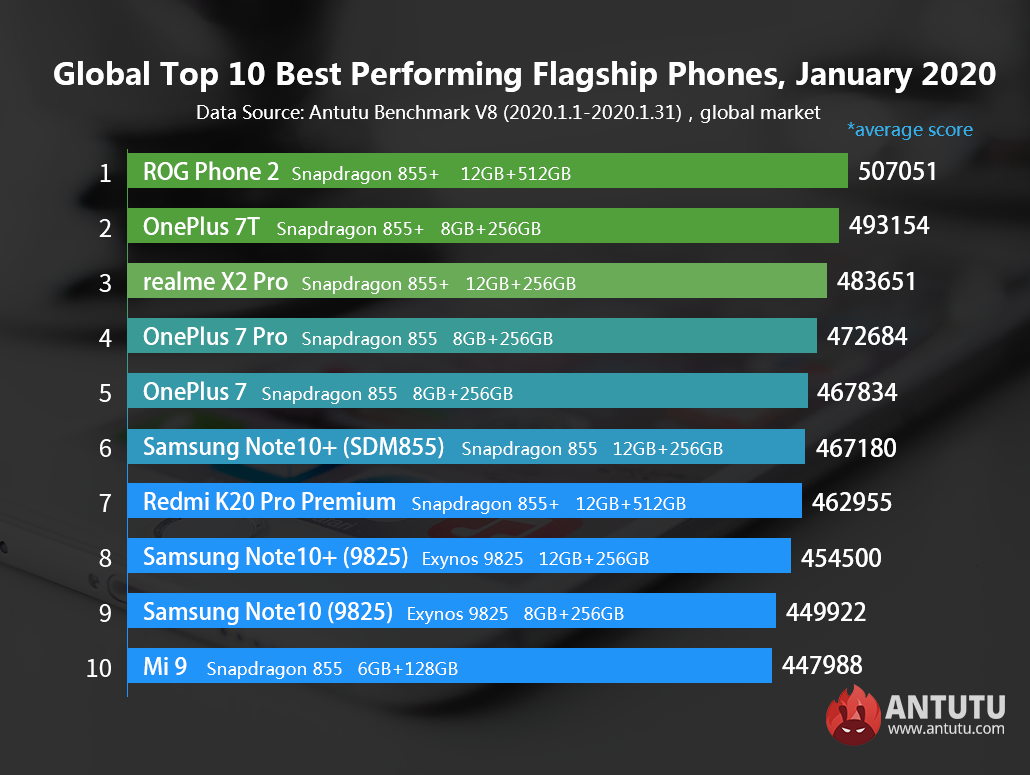 In January, the powerful gaming phone Asus ROG Phone 2 with 12GB of RAM and 512GB of storage topped the list once again with an average Antutu score of 507,051 points. This is the fourth consecutive month for the phone to occupy the top position on the list. As the phone is released in September 2019, that means it has been ranking the first on the list since its release. That makes the powerful performance of the phone more impressive.

Coming second is One Plus 7T 8GB+256GB variant, which achieves an average Antutu score of 493,154 points. This is also the fouth consecutive month for a OnePlus device to occupy the second position on the list with very small changes in score. realme X2 Pro claimed one position to reach third place with an average Antutu score of 483,651 points, 10967 points higher than the fourth ranked OnePlus 7 Pro, which is a relatively large score gap.

The fifth position also goes to OnePlus, namely the OnePlus 7 8GB+256GB variant, with an average Antutu score of 467,834 points, which is also pretty good performance with only 4850-point score gap compared to OnePlus 7 Pro.

Above is the top 10 flagship phone list for January 2020. In general, there are no big changes in the ranking of this month compared to last month. With a series of new smartphones powered by Snpadragon 865 coming to the market soon, we expect there will be some changes in the ranking list of next month. Let’s stay tuned. 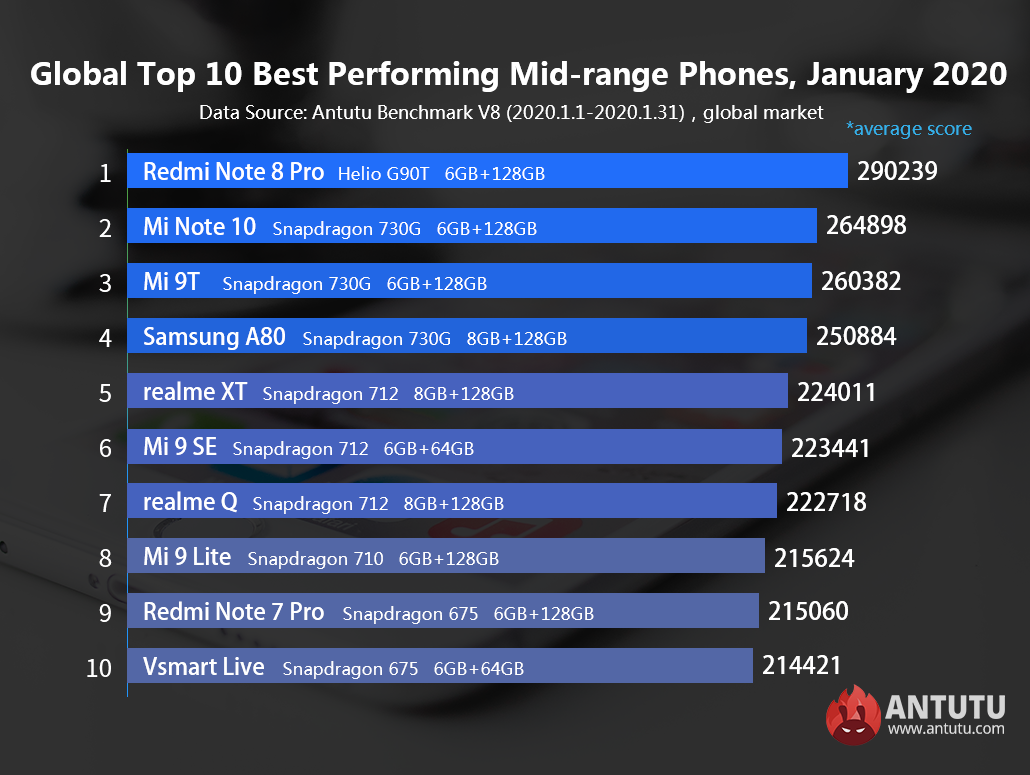 The first place for mid-range phones is occupied by Redmi Note 8 Pro 6GB+128GB variant once again, which achieves an average Antutu score of 290,239 points. It is not the first time for the phone to appear on the top position of the mid-range phone list. Although Samsung and Qualcomm have already released their new mid-range SoCs and the smartphones powered by these SoCs are already available on the market, there are yet few scores of the new phones that can be found in Antutu database which may be due to insufficient sales, and therefore no new phones can be found on the mid-range phone list of this month.

Coming second is Mi Note 10 6GB+128GB variant, which achieves an average Antutu score of 264,898 points. The biggest selling point of the phone is that it is the first smartphone in the world to ship with a 100 million-pixel camera. It comes with Snapdragon 730G SoC. Although it is top performer in terms of camera, the performance ranking depends largely on the processor, therefore it can only rank second on the list.

The third place is also occupied by smartphone from Xiaomi -the Mi 9T 6GB+128GB variant which scored 260,382 points. The Chinese smartphone maker Xiaomi swept the top three positions of the list this time.

As the first performance ranking list in 2020, smartphones on the list are still the familiar ones in 2019 and there is nothing new. However, with smartphones powered by the new 5G SoC going on sale, we can expect some changes in the ranking list of next month. Hopefully, SoCs like Snapdragon 865/765G/765, MediaTek Dimensity 1000/1000L/800 and Samsung Exynos 980 will add vitality to the list and are expected to occupy the top positions of the list for a long time.