The first quarter of 2020 has ended, and April has come. The first 3 months of 2020 have seen significant changes in the global mobile phone market due to the coronavirus pandemic. Although 5G networks and 5G phones are becoming more and more common, the pandemic has held back people’s enthusiasm for switching phones and forced them to stay at home.

It should be noted that this preferences list is prepared based on the phone configuration of the users of Antutu and thus it does not represent the preferences of the overall Android market. 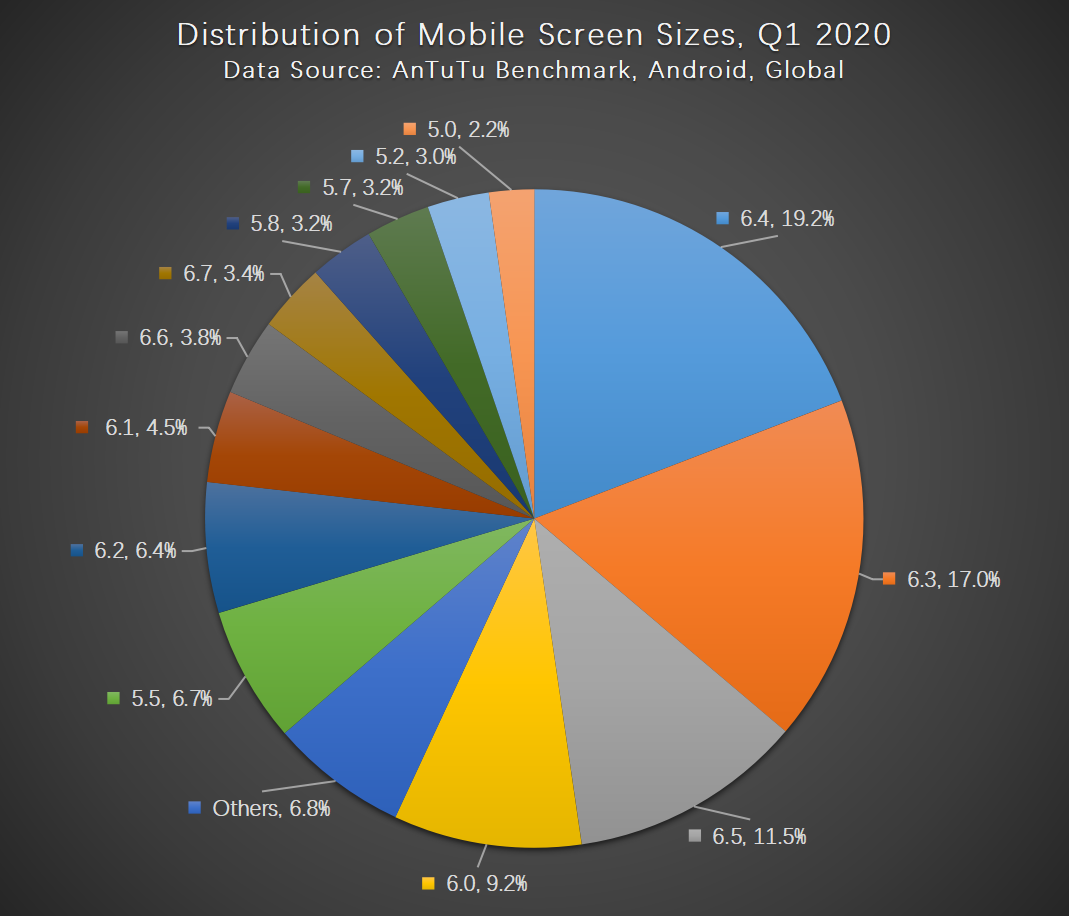 From the distribution chart, we can see that phones with the screen sizes of 6.4, 6.3 and 6.5 inches together accounted for 47.7%, almost half of all the devices. It can be seen that large screen of over 6-inch has become mainstream, and on this basis, it's up to the users to decide what screen size they can accept.

The reason for this phenomenon, on the one hand, is because of market supply chain. The production of 6-inch screen may have been stopped. Second, it is “forced” by mobile phone manufacturers that they don’t release mobile phones of small screen. As a natural consequence, the proportion is becoming smaller. This is also the natural development trend of mobile phones.

The rest like some exceptionally large screen sizes such as 6.7 inches and 6.8 inches also take up a significant proportion. it can be seen that as the screen-to-body ratio of mobile phones is getting higher and higher, the screen size that people can accept is also getting bigger and bigger. 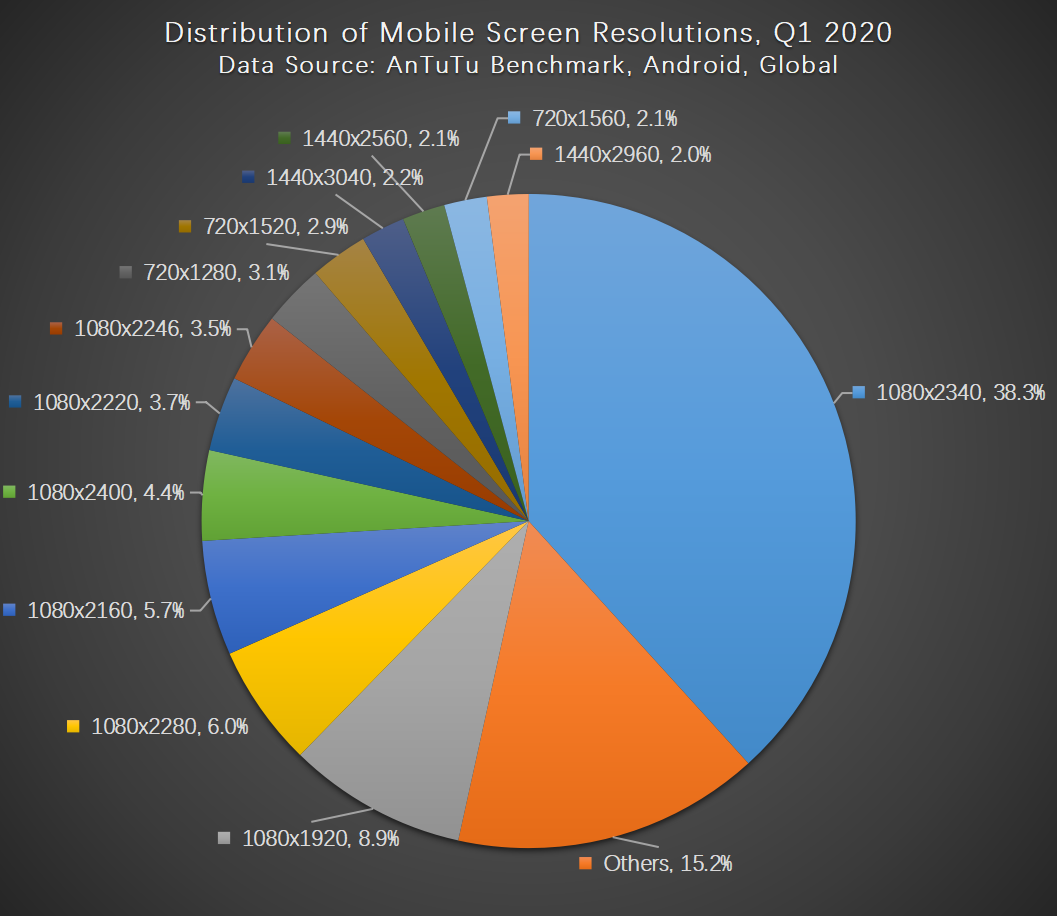 Mobile phones with 720P resolution accounted for only 8.1%. The dwindling stock means this resolution is disappearing from the market.

The proportion of mobile phones with 1440P resolution began to increase. With the popularity of high refresh rate screen, resolution also needs to be improved. Therefore, the long-stalled 1080P resolution era is about to see a significant progress. With regard to CPU, the market is still split between Qualcomm, Samsung Exynos, HiSilicon Kirin and MediaTek, with Qualcomm leading the way with 56% market share, which is larger than the total sum of rest three competitors.

However, Qualcomm's CPU share this quarter fell by 3.3 percent compared to the previous quarter. This is probably because the emergence of the 5G market requires more 5G CPUs, which gives its competitors such as Samsung opportunities to catch up. For example, Samsung’s own Exynos 990 5G is also a very good flagship CPU. In today's mobile phone market, for a newly released phone, regardless of the phone’s positioning and its branding, it must be equipped with an octa-core SoC while quad-core has become a thing of the past.

According to the statistics of Antutu, in the first quarter of 2020, smartphones with octa-core SoCs have taken up 92.5% of the market share, which is a clear evidence that with the increasing number of cameras and high refresh rate screens on phones, octa-core chips have become a necessity.

Although higher efficiency and more sophisticated manufacturing processes have in fact completely outstripped the performance required by today's phones, users are still enthusiastic about getting more.

The proportion of 8GB RAM has increased by 1.2% from the previous quarter, so it is increasingly likely that 8GB RAM will become the standard configuration for Android phones to start with, the proportion of 4GB and 6GB RAM has decreased by 1.7% and 2.2% respectively from the previous quarter. Android phones are entering a higher configuration stage, with 4GB RAM and 6GB RAM gradually being phased out.

As for the rest 2GB and 3GB RAM, they can almost be ignored. However, there is a reason for their existence as long as some old phones are still in use, but it will not be long before they disappear from the market completely. The proportion of 128GB ROM is 35.5% while 64GB ROM has a proportion of 34.9%.  The 0.4% difference between them is likely to be flat or even reversed in next quarter's preference list, as 64GB ROM size is doomed to be inadequate based on the pixel size and 8K video recording support of new phones.

And it's likely that the transition to 128GB ROM will be a bit faster than 64GB ROM.

The above is the interpretation on the preferences of Antutu's users in Q1 of 2020. From the figures, we can see that Android phones have become more and more powerful on the road of upgrading configuration. But overall, the Android market is still relatively fragmented, and it is a problem difficult to be resolved as it all depends on the manufacturer from whom you bought the phone to decide when to upgrade the Android version. However, the good thing is that currently the upgrade of Android version does not have much impact on users, so it is not very important.

Finally, it should be noted again that this only represents the preferences of Antutu users and does not represent the configuration distribution of the overall Android smartphone market.