Today, we have worked out the user preference report in the third quarter of 2020 based on the backstage data of Antutu. What kind of mobile phones do Antutu users prefer? Let's see the results.

It should be noted that Antutu preference report is based on the phone configuration of Antutu users, so it does not represent the preference for the overall Android phone market. 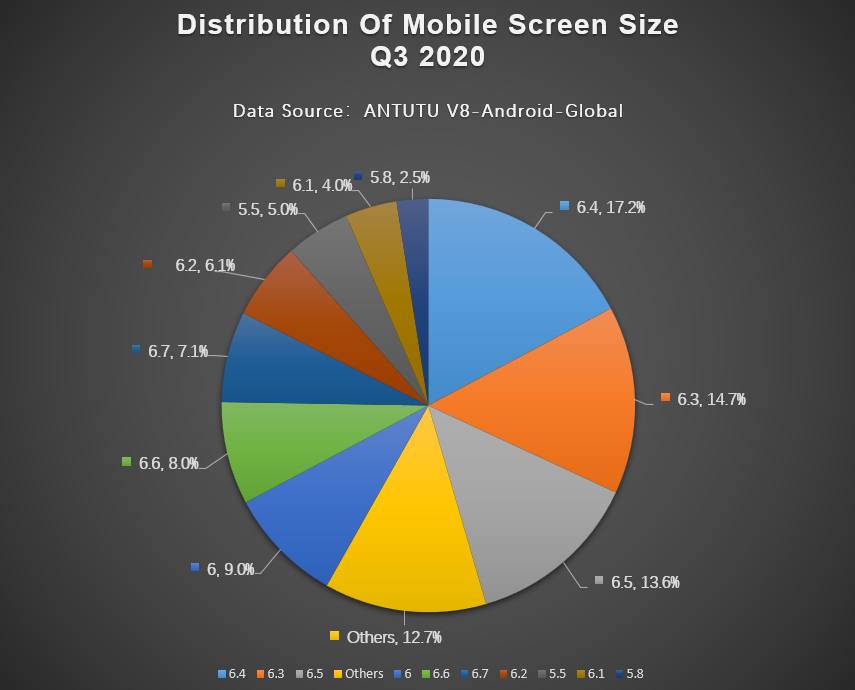 After entering the era of full screen, sizes under 5.5 inches are mostly gone. Many manufacturers no longer launch small-screen phone models, but Apple still launches phone models with sizes less than 6 inches every year, such as iPhone 12 Mini and iPhone SE.

Antutu believes that under today's technological conditions, such sizes are basically the limit for one-handed operation. In addition, 6.0-inch to 6.4-inch screens are also the most popular screen sizes used by manufacturers, so the final figure is as was expected. 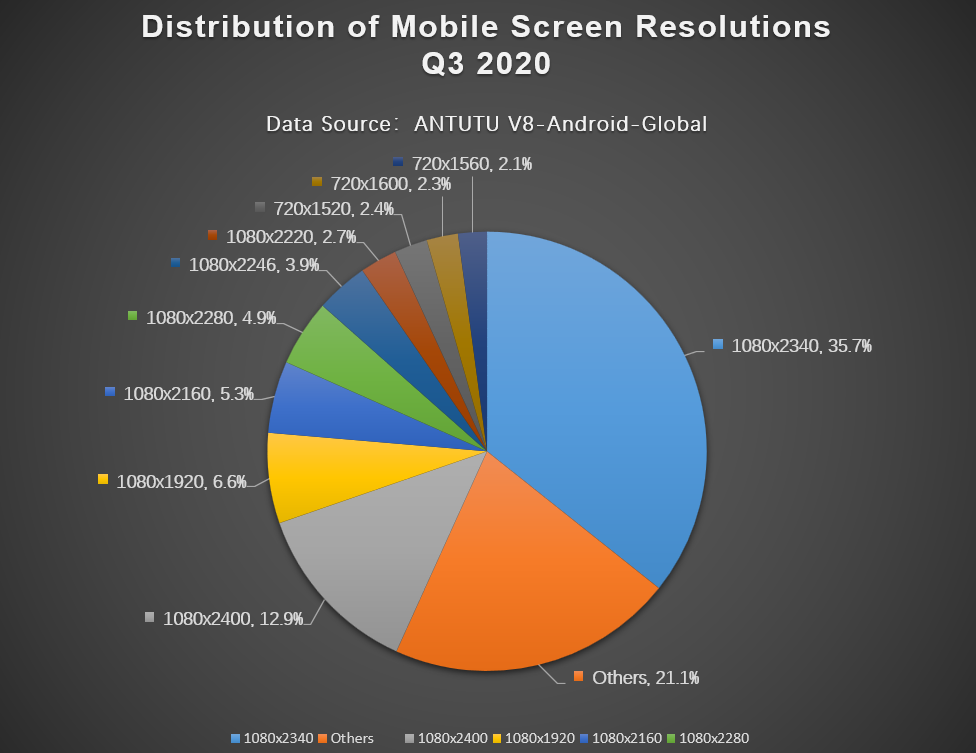 Although the phone's screen size is getting bigger, the resolution remains 1080P, as it was two years ago. It's not that users don't want higher-resolution screens, but mainly because such screens cost too much and consume too much power and 1080P is enough to meet their needs, so many manufacturers prefer to use high-resolution screens in Pro versions. 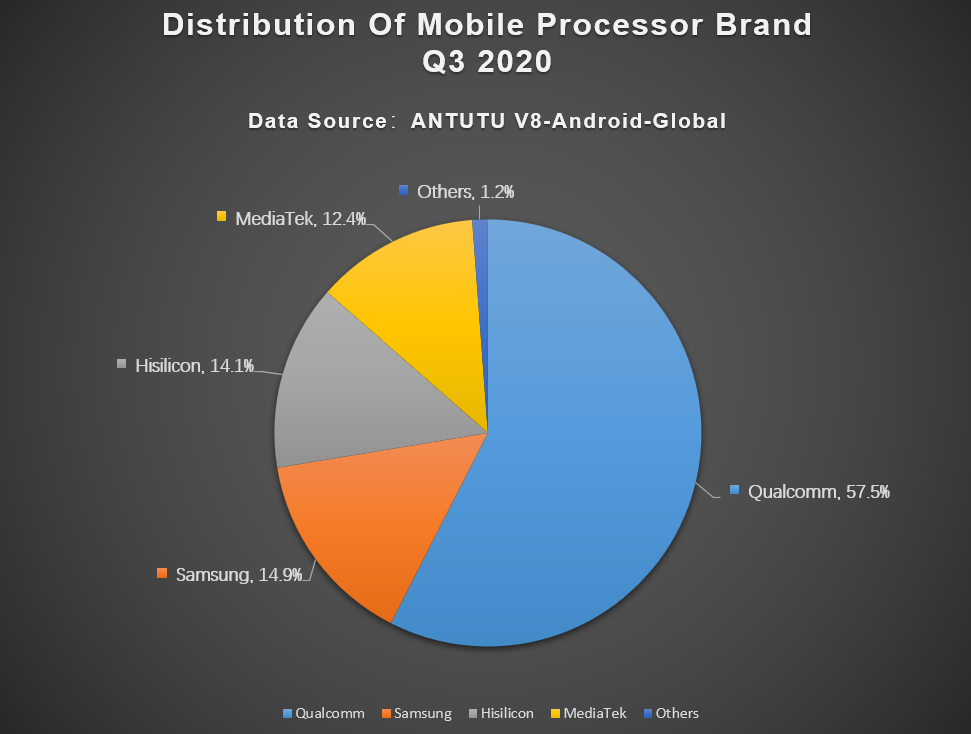 In terms of processor brands, Antutu users who are provided with Qualcomm processors account for 57.5%, Samsung 14.9%, Hisilicon 14.1% and MediaTek 12.4%.

According to the data, Qualcomm remains the dominant player in the mobile processor market, even more than Samsung and Hisilicon combined, but MediaTek's occupancy increase over the previous quarter was probably related to the launch of Dimensity processors, which is a good start in the 5G era.

In addition, impacted by the US ban, the occupancy of Hisilicon processors is expected to decrease to some extent, but there is an old saying in China that “beating foreigners by learning from their advantages”. Bans alone can't stop technology from advancing and we never know what Hisilicon's future will be. 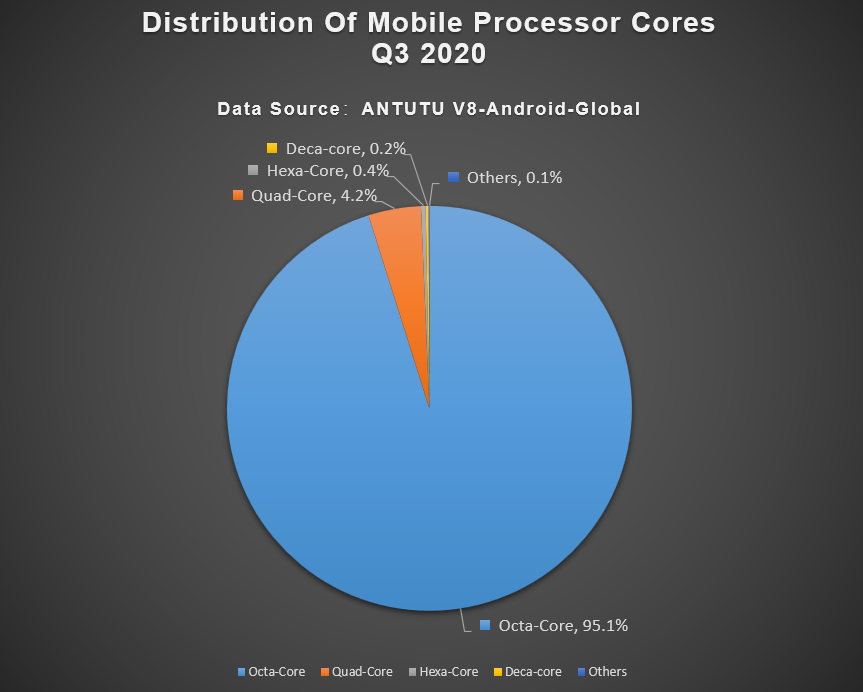 Octa-core SoC is a recognized design in the industry, which maintains a balance between performance and power consumption. According to the data collected by Antutu, octa-core chips have accounted for 95.1% of the market, fully and completely popularized at the high, middle and low ranges.

There was also the argument that multiple cores were useless, with the good example of Apple A series, which now also uses multi-core architecture, and this argument faded away.

RAM: 6G models are in the majority

According to the data, the mobile phones of Antutu users are mainly mid-range models, with 4GB and 6GB memory accounting for the majority, among which 6GB memory has occupancy of 34.3%. That is different from China, where 8GB memory is the majority, while 4GB memory is already a rarity.

Mobile phone has become an electronic device that we cannot live without, storing a large amount of personal information, and sufficient storage space is particularly important. According to the data, the 128GB version is the most used by Antutu users, accounting for 41.3% of the market.

64GB also has certain occupancy mainly because that most mid-range phones still start with 64GB and the share of 16GB further reduced. We believe that large storage capacity is the future development direction of mobile phones.

In addition, due to the characters of flash memory, when the storage space is nearly used up, the read-write speed of flash memory will be greatly affected, which will also affect the system fluency. Therefore, we recommend that users choose the version with more storage capacity.

For Google, the most important task now is how to unify Android into the latest version, both allowing users to enjoy the updated features and helping enhance Android security.

According to the data, current phone models running Android 10 system dominate at 63.3%, but Android 11, which has been launched for some time, is missing from the distribution chart, falling under "Others" and featuring a very small occupancy.

The above is the relevant information of the user preference report of Antutu in the third quarter of 2020. It can be seen that users prefer the hardware that can bring them immediate experience, such as large screen, large storage capacity and other specifications. It should be noted again that this only represents the preferences of Antutu users and does not represent the configuration distribution of the overall Android mobile phone market.