The Global AndroidPhone Performance Ranking List in November has changed dramatically and phoneSoC technology has officially welcomed its era of 5nm. Although new flagshipproducts, i.e., 5nm SoC of Huawei Hisilicon and Qualcomm Snapdragon have beenreleased, the former was on the market first. So the performance of Huawei Mate40 Pro powered by the Kirin 9000 chip using 5nm technology surpassed ROG Phone3which had ranked first on the list for several months in a row. Let’s take a look at theranking.

The data wascollected from November 1, 2020 to November 30, 2020 and the results on theRanking List are average scores instead of highest ones. There are more than1,000 pieces of data on single phone model. The data was calculated based onAntutu V8. If several memory capacity versions of any single phone model areavailable on the List, the version with the highest score shall prevail 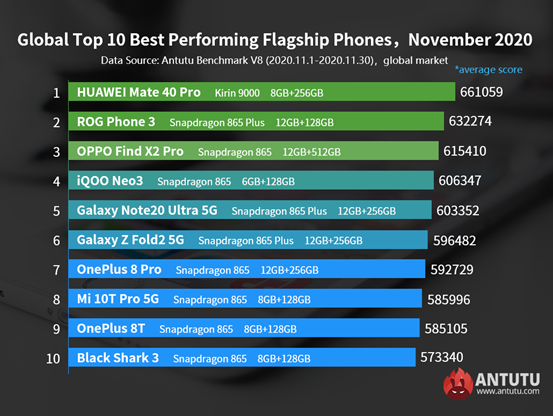 Huawei Mate40 Pro is equipped with Huawei’s latestand possibly the last generation of flagship SoC Kirin 9000. Kirin 9000 is manufactured by TSMC using 5nmtechnology and integrates as many as 15.3 billion transistors, 30% more thanApple A14. On the release day of this SoC, it was theindustry’s first 5nm SoC integrated with 5G, and it is also the current SoCwith the most transistors.

The launch ofSnapdragon 888 on December 1 officially made it a rival to Kirin 9000. However,the flagship models equipped with Snapdragon 888 may not be available untilearly January at the soonest, so Huawei Mate40 Pro is expected to sustain thefirst place for two months.

As the first Snapdragon 865 Plus phone model, ROG’sgame phones have historically held the first place on Android Phone PerformanceRanking List for a couple of months, but this time it meets changes of racingtrack. The 7nm technologyis fundamentally different from the 5nm Kirin 9000, so it’s a matter of courseto be surpassed.

But anyway, ROGPhone3’s optimization andimprovement in game performance are still unmatched by other mobile phones.

Now that the firstplace has changed, the original ranking has to be pushed back one place, soOPPO Find X2 ranking the second place last month come in the third place inNovember.

It is equipped withSnapdragon 865 SoC and it should be restated that OPPO Find X2 launched inMarch this year has been hovering in the top three places on Global AndroidPhone Performance Ranking List for nine months. It is also expected to be seenon the List next month, which is not easy for rapidly-evolving Android phones,but most importantly it still looks excellent enough to be worth buying.

In addition thatHuawei Mate40 Pro grabbed the first place, there is a newcomer on the RankingList, namely, Black Shark 3, which, as a game phone, finally made it onto thePerformance Ranking List.

Since no newmid-range SoC model was released in November, there is no change in the rankingof mid-range phones from last month. The brand new mid-range SoC will not beupdated until the first quarter of next year, so users who want to buy amid-range phone have to wait a little longer.

Among mid-rangephones, HONOR 30 ranks the first in November as it did last month. It isequipped with the Kirin 985 processor independently developed by Huawei, secondonly to the previous generation of the flagship Kirin 990 in terms ofperformance, which is a reduced frequency version, so it is appropriate to beused as a mid-range model. Counting Huawei Mate40 Pro that carries Kirin 9000SoC and ranks the first among flagship phones, Huawei took the double championplaces of Overseas Android Phone Performance Ranking List in November.Congratulations to Huawei.

HUAWEI nova 7 ranksthe second in November as it did in last month. It uses the same chip as HONOR30 that topped the List, that is, Kirin 985. With very similar appearancedesign, the biggest difference is their camera. HONOR 30 supports 5x opticalzoom and HUAWEI nova 7 supports 3x optical zoom. Other than that, they arepretty much the same thing, so you can see that their final score is prettymuch the same.

Redmi K30 5 G ranksthe third in November as it did last month. As a phone launched earlier thisyear, it is pretty good for it to have such performance at the end of the year.Although it’s been 10 months since its launch, if Qualcomm fails to updateits new mid-range SoC, Redmi K30 5G is still expected to be made onto theRanking List every month.

Compared withinstant change of flagship model ranking first, the ranking of mid-range phonesis a little mundane, with the same ten mobile phones in the same ranking orderas that in last month, only a little change on their scores. It’s a normal situation,after all, the performance of flagship phones can more mirror the strength of acompany in the R&D and improvement.

That’s all for the Ranking List in November 2020. Congratulations again to Huawei for winningthe first place in both the flagship and mid-range phone rankings. We also hopeHuawei can sustain this position for a long time.