As time comes to February 2021, there will be many points of interest in the mobile phone industry, because many new products will be released. As the pacesetter in new products to seize the market share every year, Apple is no exception. However, there is a high probability that Apple's new phones will be released in March. In this case, let's first take a look at the performance ranking of those products that Apple has released before.

Today, we have released the iOS Device Performance Ranking List in January 2021 according to the data collected from the backstage of Antutu, which is almost still in a stable state because of no release of new iOS products, except for little change.

It should be noted that the data in this ranking list was calculated based on the iOS Antutu V8 and collected for a period from January 1 to January 31, 2021, with the results in the ranking list being average scores instead of the highest scores, which are more representative. 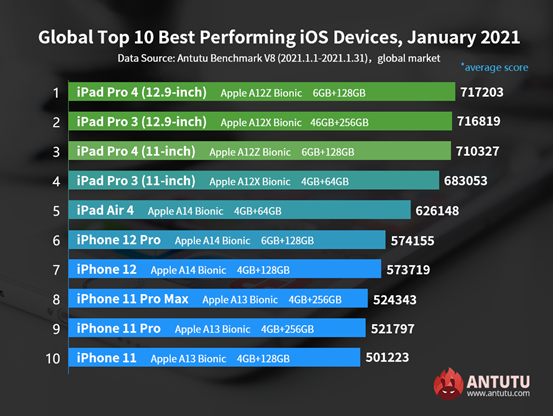 The iPad Pro 3 (12.9-inch), which ranked third last month, became No. 1 in one fell swoop. As the largest iPad product equipped with Apple A12X processor, of course, there is no need to say much about its performance. Even in the current Apple Store, it can be difficult for you to find an App that it is hard to run. This time, its average score is over 9,000 points higher than that in December 2020, which proves its strength once again and also shows that the gap between A12X and A12Z processors is actually very small.

All the above three products are powered by Apple A12 series processors, including A12X and A12Z respectively. However the final results are not entirely processor-based, as the experience also depends on the real usage and the results are only for reference.

In the first monthly iOS performance ranking list in 2021, except for the No. 1 iPad Pro 3 (12.9-inch) and the No. 5 iPad Air 4, which have changed their rankings compared with last month, all other products are still stable in their own rankings, indicating that iOS products are so reassuring.