The first quarter of 2021 has gone in the blink of an eye. Major mobile phone manufacturers will update their flagship products in the first quarter of every year. Various domestic and overseas brands bring their brand new phones, which will shoulder the mission of starting the war among the mobile phones in the “red sea” market this year. Compared to the previous product update, the flagship phone market has shown significant progress in all respects.

This time, the data was collected for a period from March 1 to March 31, 2021, with the results in the ranking list being average scores instead of highest scores; and there are more than 1,000 pieces of information on a single phone model. The data was calculated based on Antutu V8. If any single phone model has several memory capacity versions, the version with the highest score shall prevail. 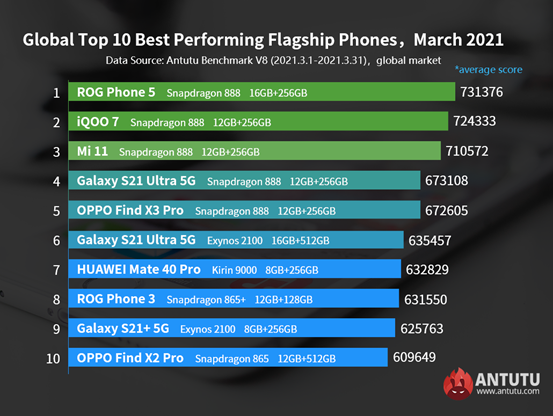 ROG’s new phones frequently top our overseas performance ranking lists every year. ROG Phone 5 released on a date much earlier than its predecessors ever before is no exception and holds great promise for occupying the very top spot for the longest time in history.

This year, ROG Phone 5 has little change in the appearance design. As a gaming phone, its performance and heat dissipation ability is undoubted. The 6.78-inch hole-free full screen made from Samsung’s AMOLED E4 luminous materials, with 144Hz refresh rate and 300Hz native touch sampling rate ensure the visual advantage and experience of game players on the screen.

In particular, the top-level version of ROG Phone 5 Phantom has adopted the world’s first 18GB LPDDR5 RAM, which is even superior to that of most computers. Hence, it is worthy of being No.1 in the world.

iQOO 7, which was released in January and shot to No. 1 of the ranking list in February, has been pushed back to second place by an overpowered rival, Rog Phone 5. However, iQOO 7 was only about 7,000 points behind Rog Phone5 in terms of final score. As a highly cost-effective mobile phone, it is also a heavyweight.

Mi 11, the world’s first phone equipped with a Snapdragon 888 processor, opens the era of Qualcomm’s 5nm processors and also takes users’ demand for mobile phone performance to a new level.

In the Chinese market, apart from Mi 11, Xiaomi has released Mi 11 Pro and Mi 11 Ultra recently. The three phones have almost the same configuration in terms of performance, with the biggest difference in the camera upgrade. Regardless of the camera improvement, the final scores of the three phones should be similar, also proving that Mi 11 has represented the top-level configuration of flagship phones in the first half of this year since the moment of its release.

Except that the Galaxy S21+ 5G ranking No. 9 is slightly lower than ROG’s gaming phone of last year in terms of the score, even if it is equipped with the 5nm Exynos2100 processor, other phones equipped with 5nm processors outperformed those with 7nm processors of last year. The Oppo Find X2 Pro, which ranked top three for several months last year, is the last one this time. This is the last glory of the Snapdragon 865 era. 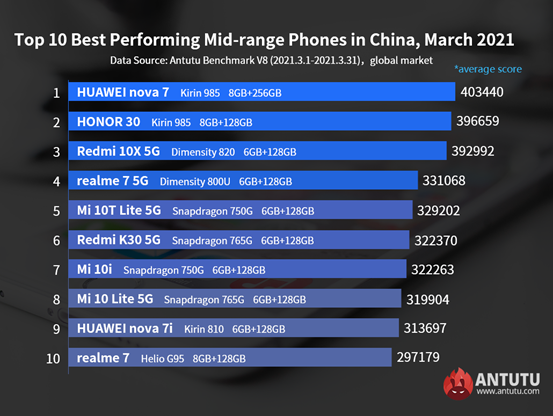 Those who often take a look at our ranking lists should also be clear that, for several consecutive months, No. 1 and No. 2 on the mid-range phone performance ranking list have been bouncing back and forth between the two phones, either Huawei nova 7 or Honor 30. There is also a very small difference in average score between the two phones, because the two phones can actually be regarded as the same model of different brands. Thus, no more description is given here.

Just as the first two do, Redmi 10X 5G ranking the third still remains unchanged. The average score of Dimensity 820 is almost the same as that of Kirin 985. In terms of the Chinese market, the flagship K40 series of Redmi has been released, and the next step is to wait for the release of other mid-low-range phone models. By that time, the ranking list will change greatly.

It can be seen that, except for a minority of 4G phones on the mid-range ranking list, all the other phone models are already 5G phones. The international market is a global market because of its extensive coverage, so 4G mobile phones will not be knocked out soon. Since these 4G phones are released in the era of 5G phones, they will be more cost-effective, which could be a “blessing in disguise” for users with low budgets.

That is all for the global Android phone performance ranking in March 2021. It’s no surprise that ASUS’s gaming phone ROG Phone 5 took the No.1 position once again among all the mobile phones on the ranking list. The score of 731,376 is also the highest. It’s April now, and it’s still unknown whether it will be surpassed by any new product unveiled in the second half of this year.