September saw a lot of new phone launches in the Chinese market, while in contrast, there were no major changes in the global market. The snapdragon 888+ processor is mainly used in the Chinese market, even though it is only a minor upgrade with a more serious overheating problem, people are still keen to pursue the updated performance.

In this case, the Global Android phone performance list in September is not much different from the list in August, and the ranking is basically unchanged.

Let's take a look at the specific data below. It should be noted that figures in this ranking list were calculated from September 1 to September 30, 2021. The results in the ranking list are average scores instead of the highest scores, and thus more representative. 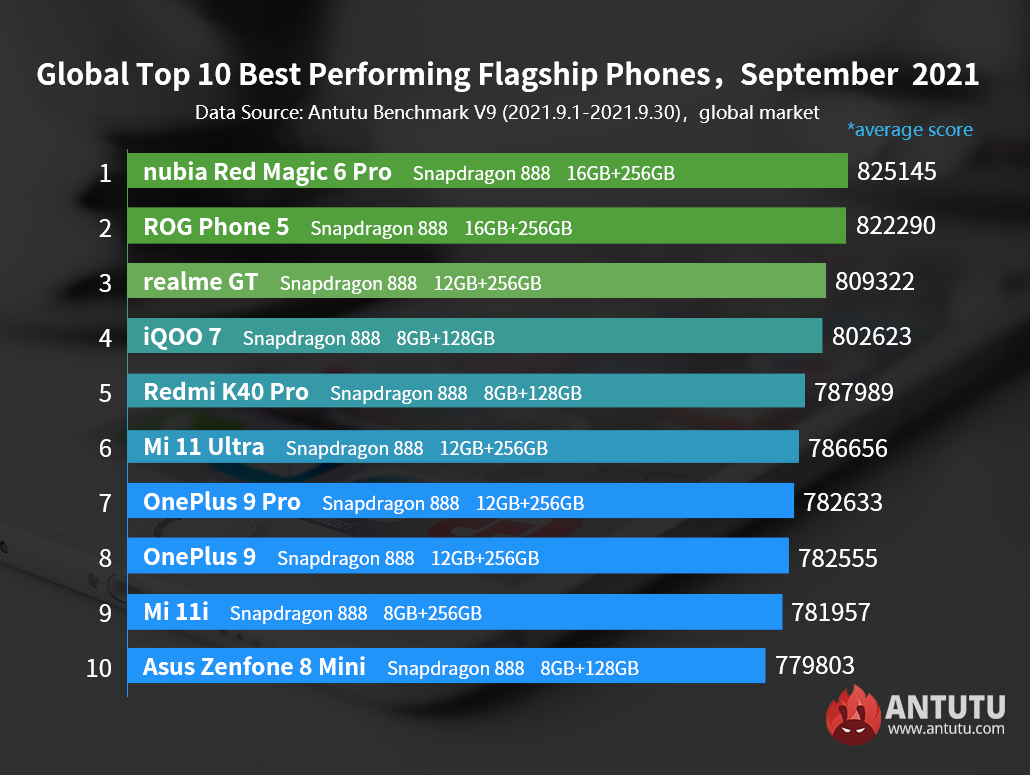 There is no need to worry about the performance since it is the basic configuration of a game phone. Only the super performance combination can meet the different needs of various games. Moreover, the upgraded Nubia Red Magic 6S Pro has been released in the Chinese market, using Snapdragon 888+ processor, and adding RGB lights to the cooling physical fan, making this game phone better in appearance.

As one of the game phones, ROG Phone 5 still ranks behind Nubia Red Magic 6 Pro this time. The two phones are both snapdragon 888 + 16G RAM + 256G ROM combination, and the average running score is only 2,000 points difference. Therefore, there is not much difference in the user experience, and the two phones are more different in the game configuration.

For example, Nubia Red Magic 6 Pro has a physical fan to cool the phone, while ROG Phone 5 has more than a dozen virtual buttons, which can bring more sophisticated operations to players. Therefore, when buying such game phones, people can choose according to their favorite specific games.

In fact, if Realme GT still belongs to the OPPO ACE series, it could also be positioned as a game phone, but its appearance is not like a game phone. It is more like a comprehensive product that can not only meet the daily use but also bring a good game experience. The device has a better cost-performance after OPPO handed it over to RealMe, the average performance of 809,322 is the best proof of it.

Gaming phones have performance advantages, so their performance scores are higher, and after them are some very cost-effective models, which are powerful and affordable, providing good choices for many users.

There is another Snapdragon 778G phone in the mid-range mobile phone ranking list, and another "old friend" in the top three is out of sight. 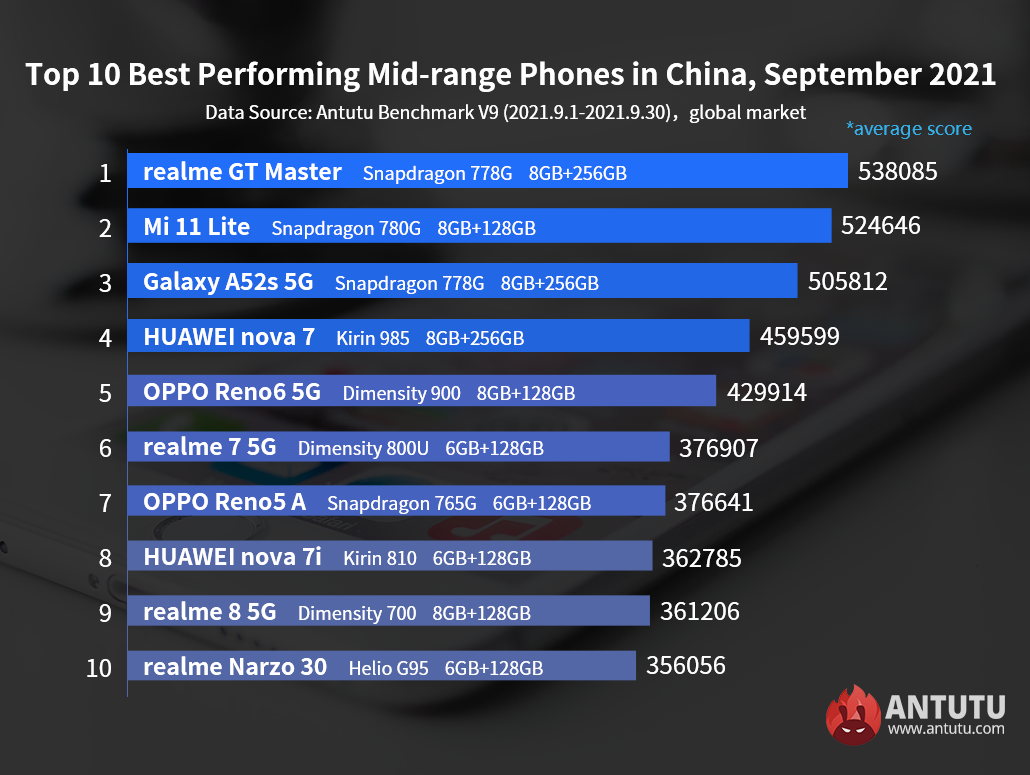 Although the Snapdragon 778G processor was launched by the Honor 50 series, it is obvious that Honor 50 series mobile phones are weaker than the cost-effective Realme in terms of running score, and have never had a chance to be on the list. The Realme GT Master is still the No. 1 product in the list of mid-range mobile phones. The biggest highlight of the phone is the design, MUJI designer Naoto Fukazawa adds some recognizable appearance to the RealMe phone which has not changed much before.

The Mi 11 Lite is the first and only Snapdragon 780G phone on the market. It is extremely thin and light, with a thickness of 6.81mm and a weight of 159g, making it a very different choice in the 5G phone market, where most phones weigh over 200g.

The Snapdragon 778G is built on TSMC's 6nm node and brings an 8-core Kryo 670 CPU. The maximum dominant frequency is 2.4GHz. The CPU performance claims to be improved by 40% compared with the previous generation. The GPU is Adreno 642L, which also has a 40% performance increase.

The above is the list of Global Android phone performance in September 2021. Overall, there is no big change, the top three phones on both flagship and mid-range lists are the same as last month. It is worth noting that among the 20 mobile phones, Qualcomm processors account for 14 seats, and the processors of the flagship phones are all from Qualcomm, Huawei HiSilicon and MediaTek can only have one or two models in the mid-range market. Although we all know that Qualcomm has always been the dominant processor in Android phones, it is still a bit upsetting to see such a real proportion in the performance list. The dominance of any market will gradually create a monopoly, which is not conducive to development.