The first quarter of 2022 passed faster than expected. During this quarter, the CPU process entered the 4nm era, and the Antutu scores for devices with this process all reached over a million points. The fast charging speed has also increased rapidly from around 65W to a maximum of 150W.

Ordinary users may not be that interested in these numbers, but the fact that the mobile phone industry can make such great progress in three months is well worth recording for those working in the industry.

We have worked out the user preference ranking list in Q1 of 2022 based on the backstage data of Antutu. What kind of mobile phones do Antutu users prefer? Let's have a look at the ranking list.

It should be noted that this preferences list is prepared based on the phone configurations of Antutu users and thus it does not represent the preferences of the overall Android market.

The change in screen size in the first quarter of 2022 is not significant compared to the figures for the fourth quarter of last year.

In third place, the market share of 6.4-inch screens saw a 0.3% increase, which is rare given the trend of users preferring larger screens. It's probably because some phone manufacturers have followed Apple's strategy and launched a standard or mini version with entry-level small screens.

It is expected that many mobile phone manufacturers will adopt this strategy to launch their flagship products in the future. The more detailed the product categories, the more choices for users and the higher the revenue for manufacturers. However, this is only a strategy that can be done by large manufacturers, small manufacturers do not have the ability to launch a diverse range of products. 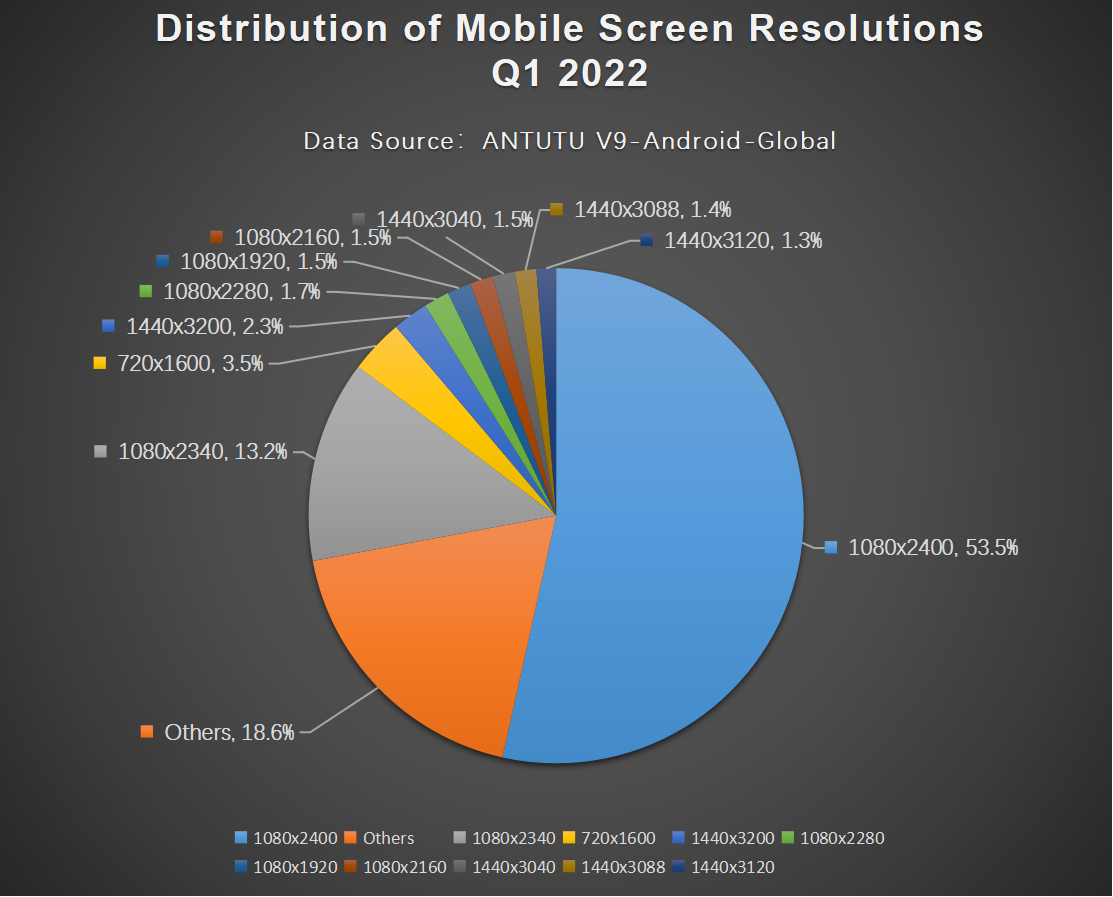 The market share of different screen resolutions also does not change that much. 1080p is still the mainstream, with the highest share being 1080 x 2400p, accounting for 53.5% of the total, occupying more than half of the pie chart.

In fact, all the 1080p in the chart belong to the same resolution level. The difference in the numbers behind them is only the result of the different phone screen sizes. For example, the number behind the 6.7-inch screen is larger than the 6.4-inch screen, but the resolutions of the two phones actually belong to the same 1080p level, and there is no substantial difference. 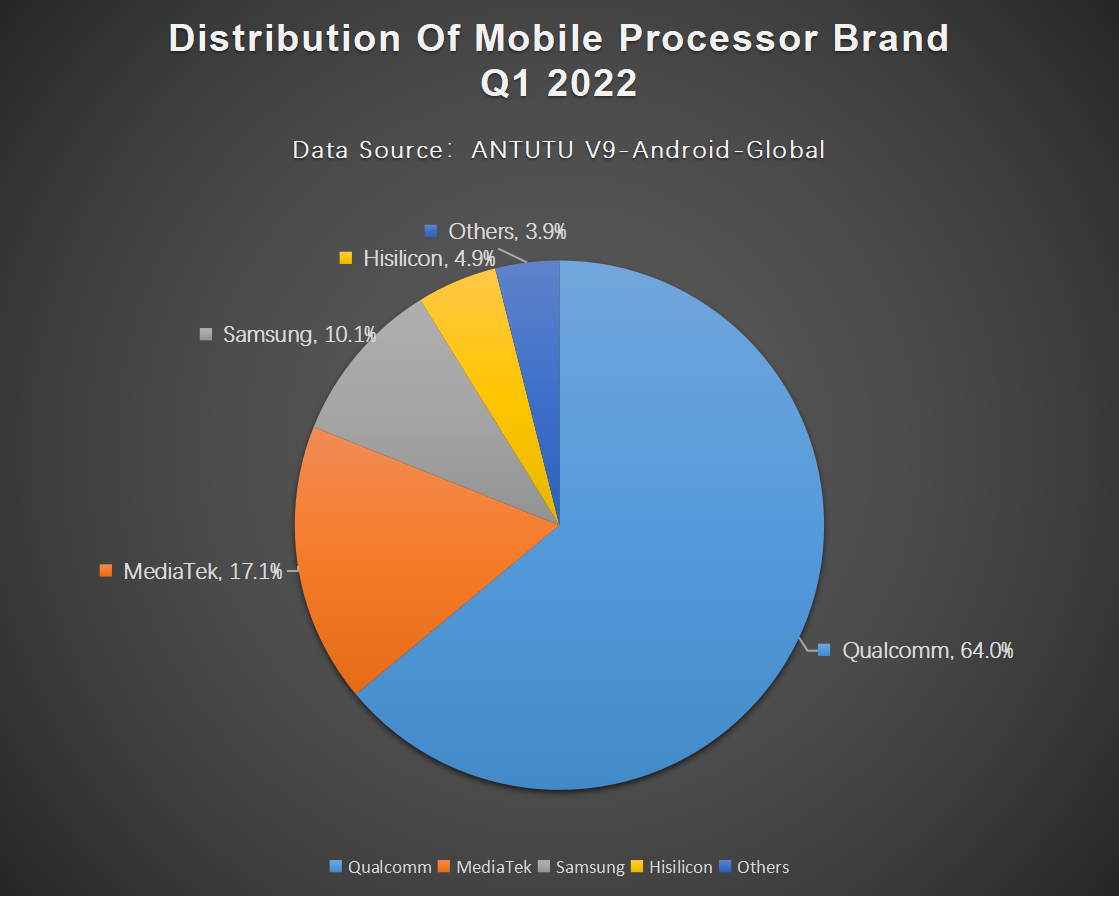 The market share of processors from Qualcomm, MediaTek, and even Samsung increased in the first quarter.

Compared with the fourth quarter of last year, the market share of Qualcomm increased by 0.6%, MediaTek by 0.7%, and Samsung Exynos by 1.3%. The markets of Hisilicon and other lesser-known brands are being occupied by these three companies.

The Snapdragon 8 Gen 1 launched by Qualcomm this year has a poor reputation, but many high-end brands still choose to use this processor, given the high recognition of Qualcomm chips among users and large phone manufacturers. The increase in MediaTek's market share, on the other hand, is due to its increased market demand. MediaTek is very promising to seize more market this year with the Dimensity 9000 and Dimensity 8100. People are also looking forward to seeing that Qualcomm has a competitive rival in the market.

The market share of Octa-core phones increased by 0.2% compared to the fourth quarter of last year, reaching 98.5%, and reaching 100% is just a matter of time.

As for why Quad-core and others still occupy a small share of the pie chart, it's just that some of the old users are still using them, perhaps as a backup or a nostalgic product.

The share of 8GB RAM has increased again by 1.9% compared to the previous quarter to 38.6%. Its share has increased for three consecutive quarters, which shows how fast the mobile phone industry is growing.

In contrast, 6GB RAM, which used to account for the largest share of the market, continues to show a downward trend, accounting for just 29% of the market, down 2% from Q4 last year. The market of 6GB RAM is being occupied by 8GB, and the mobile industry is already essentially starting with 8GB of RAM size.

The share of 12GB RAM also increased by 0.8% from Q4 to 10.3%, which also shows an increase for three consecutive quarters. The flagship phone of 6GB RAM in the current market is only to drive down the starting price, most users won't go for this version for the tiny price difference - not having enough RAM is a lot more trouble than not having enough ROM. 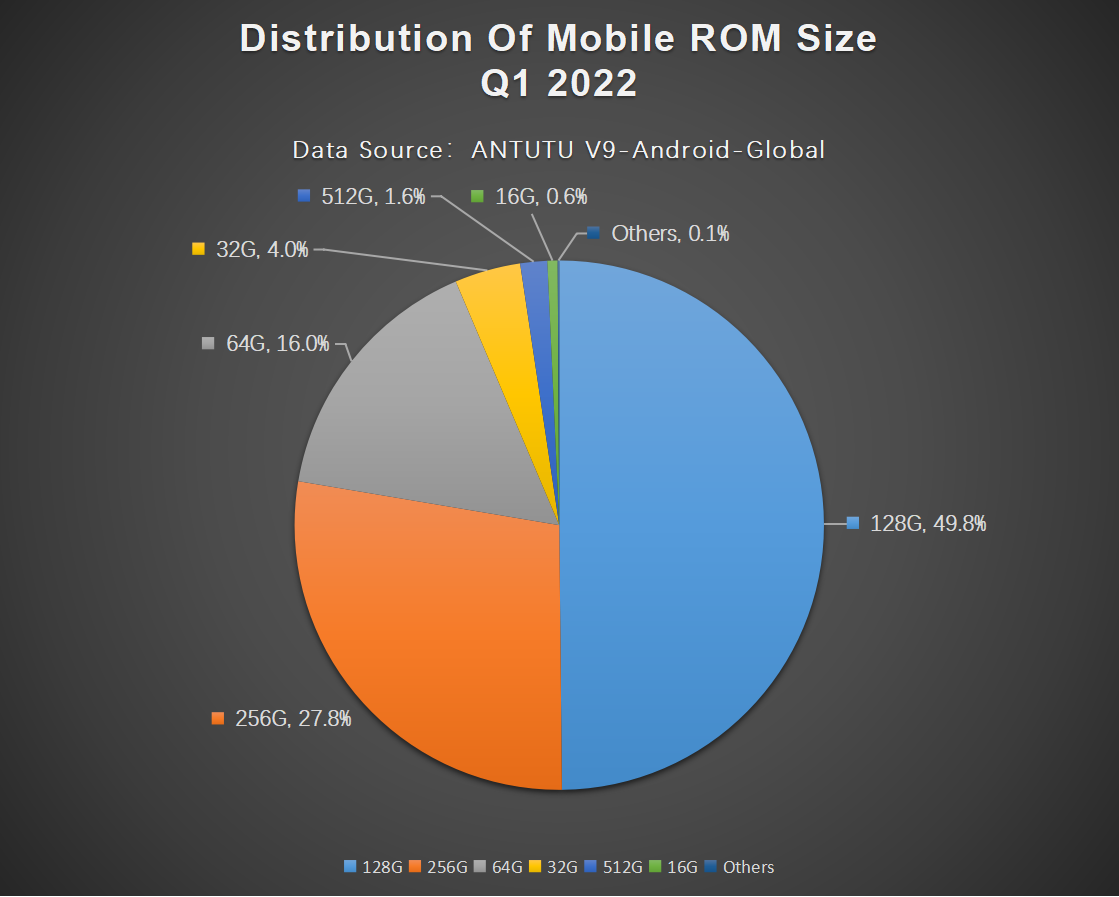 The largest increase over the fourth quarter of last year was in the share of 256GB, which increased by 2.6% to 27.8% and ranked second. 64GB and 128GB fell by 2.5% in total share. With 8GB RAM becoming mainstream, it is inevitable that the market share of 256G ROM will also increase.

The easiest and fastest growing part of the mobile phone industry is the size of RAM and ROM. As long as there are no problems in the supply chain, the increase in these two components is only a matter of cost. Android has long had 1TB ROM products, and as long as the price is reasonable, there will be users willing to buy them.

Mobile apps now always start with hundreds of megabytes, and games require more than 10GB of space, so 256GB ROM will inevitably become a rigid demand. 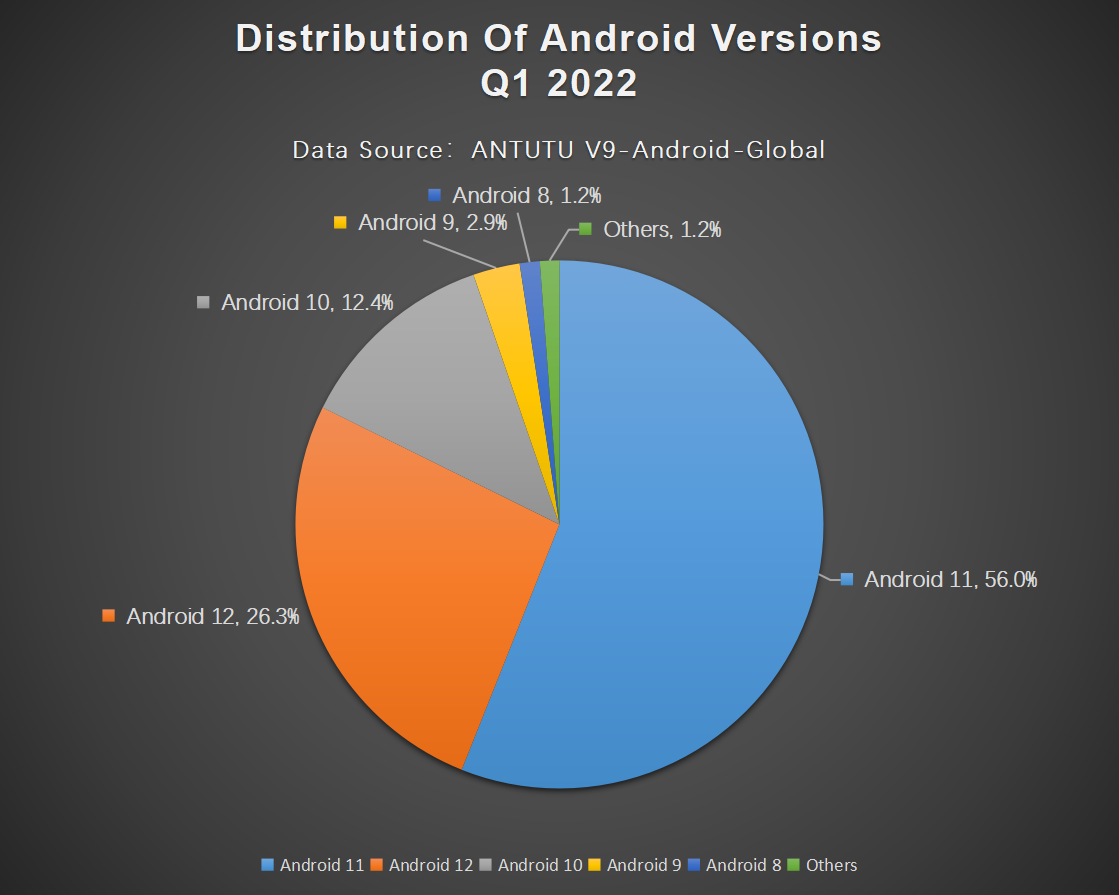 The latest Android version, Android 12, has been attracting a lot of attention since its release.

Last quarter the share of Android 12 had only a 4.6% increase because this version was just recently released. In this quarter, its share increased to 26.3%. Manufacturers are updating their Android versions very quickly and users are actively updating to the latest Android versions because of the increased security.

The share of the older Android versions did not change that much, perhaps because the mobile phone hardware configuration is too old to support upgrading to the latest Android system.

LTPO, in short, is an adaptive refresh rate technology. It can automatically adjust the screen refresh rate according to the content shown. For example, when watching videos and playing games, it will automatically switch to a high refresh rate, while when reading articles, it will switch to a very low refresh rate, some phones even come with an always-on display operating at a frequency of 1Hz. A large number of flagship phones in the first quarter of 2022 have been upgraded to the latest LTPO 2.0, with more accurate adaptive refresh rate adjustment and a more power-efficient screen, which is a very important advance in the development of screens in recent years.

As can be seen, while the share of 60Hz is still the largest in the pie chart, 120Hz is actually the real mainstream of the market. 144Hz and 165Hz screen refresh rates have also increased by 1.6% and 0.2% respectively, and these should be gaming phones. Mainstream screen market and suppliers are less likely to choose such high screen refresh rates, as the human eye does not feel much improvement in refresh rates higher than 120Hz.

That's the overall global user preference list for the first quarter of 2022. As the start of a new year, the biggest and most intuitive change in this quarter is the processors. The quality of the Dimensity series launched by MediaTek has been greatly improved, which gives MediaTek the strength to officially compete with Qualcomm from this year onwards. Let's see how mobile phone manufacturers use the Dimensity series processors to improve MediaTek's market reputation.