In October, there were no other competitive new devices released in the Android market other than the Xiaomi 12T Pro. It seems that phone manufacturers are focusing on releasing new devices powered by Snapdragon 8 Gen 2 in mid-November.

The Android performance list hasn't changed much from September. Most of the top 10 on the flagship phone list are Snapdragon 8+ powered devices, while the ROG 6 Dimensity Supreme Edition, which topped last month's list, is not on this list. It seems that despite its performance, the number of releases on the market is not very high at the moment.

It should be noted that figures in this ranking list were calculated from October 1 to October 31, 2022. The results in the ranking list are average scores instead of highest scores, and thus more representative. Let's start by looking at the list of Android flagship phones. 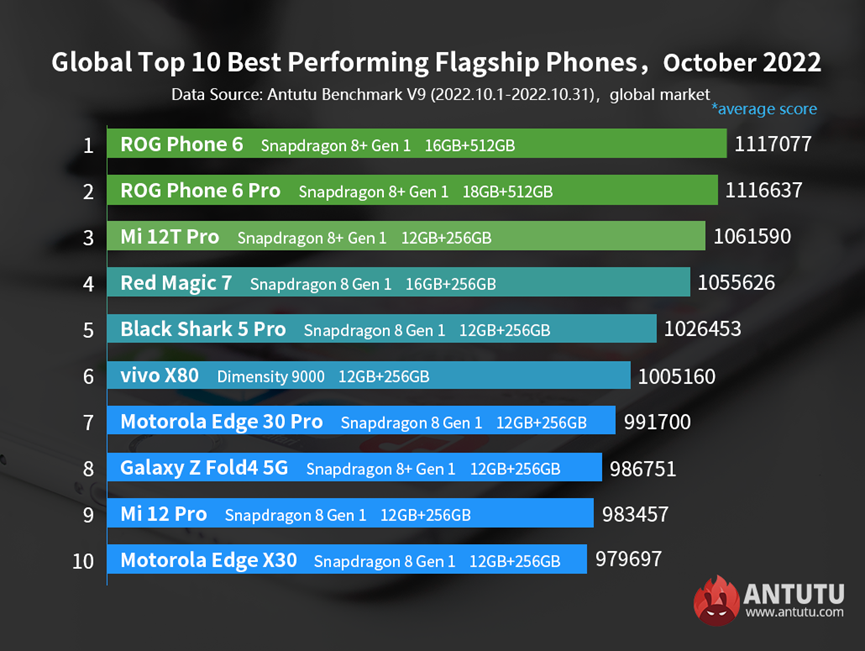 Gaming phones have always been outstanding in terms of configuration, performance and running scores, so it's no surprise that the ROG Phone 6 is in first place this time. This phone is powered by a Snapdragon 8+ Gen 1 processor. In fact, the Snapdragon 8+ Gen 1 could have performed better, but it was impressive enough to reach over 1.1 million points, which also represents the best performance of flagship phones at the moment.

The phone maintains the design features of previous ROG phones, with advantages such as virtual buttons, an ultra-high refresh rate screen and a large battery capacity, making it a favorite among gaming enthusiasts.

We finally see a non-gaming phone ranked in the top three of the list. As the second phone with 200 megapixels, the Mi 12T Pro has a top-notch configuration in every aspect. It has a superb camera and is powered by one of the most powerful processors currently available in Android: the Snapdragon 8+. It has a built-in 5000mAh battery and supports 120W fast charging.

In terms of appearance, the Mi 12T Pro features a straight screen design with a good overall screen-to-body ratio. The back of the device adopts the design of the Xiaomi 12 series, especially the design of the rear camera module is basically the same as the series, with a matrix triple camera design and separated by lines for better visual effect.

The top ten of the October sub-flagship list is also broadly similar to September, with the Dimensity 8100 occupying the top four positions on the list and the Snapdragon 870 taking positions five to ten. 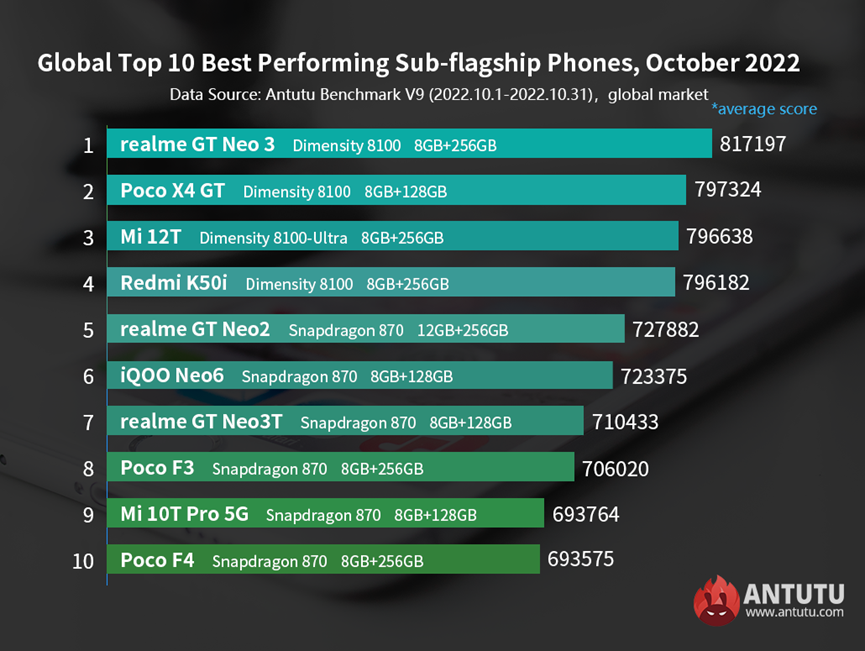 The realme GT Neo 3 has been in the top 10 of the sub flagship list many times. The powerful cooling capability allows it to perform a little higher than its competitors. At the same time, the 5000mAh battery capacity and 80W fast charging capability make it competitive in terms of battery life. All in all, the realme GT Neo 3 is considered an affordable gaming phone.

As a sub-brand of Xiaomi, the Poco offers the same great value for money as the former Xiaomi. 144Hz refresh rate and HDR10 make it one of the best devices in its price range, while in terms of image configuration, the Poco X4 GT still maintains the 64MP triple camera combination and sample processing is top of the line in the sub-flagship category. However, the Poco X4 GT is below the competition in terms of looks and some other features. 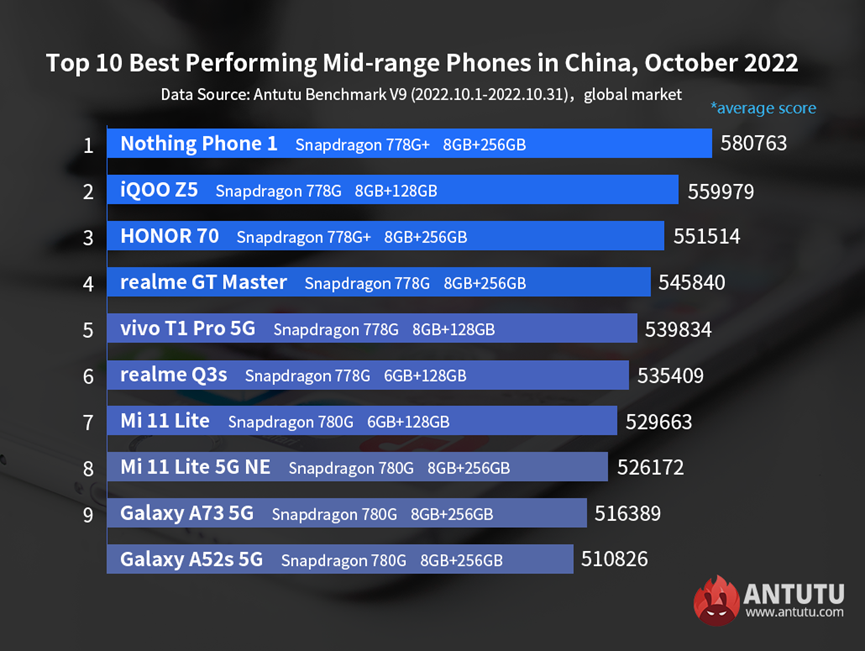 Compared to the flagship and sub-flagship markets, which are full of changes and creativity, the mid-range market has not changed much over the year, which shows that the mid-range market has not received much attention. This year, with the availability of sub-flagship phones with better cost performance, it is understandable that mid-range phones, which are priced higher, are not popular in the market, after all, users are considering the overall cost performance, not just the appearance of the phone.

That's all for the global Android phone performance list in October 2022. Two new flagship processors, the Snapdragon 8 Gen 2 and the Dimensity 9200, will be released soon in November and phones powered by these two processors are likely to be released at the end of the month. Which processor will have the better performance? Let's look forward to the November list.