Compared to the Chinese market, the international smartphone market did not have many new releases in February 2021. It is why the one that rushed to the top of the ranking list this monthis a new release in the Chinese market. This model is also the world's second smartphone equipped with a Snapdragon 888 processor, even earlier than its rival from the international first-tier manufacturer Samsung. Furthermore, strong performance is always the biggest selling point of this brand, so we have a champion with a very high average score this time.

This time, the data was collected for a period from February 1 to February 28, 2021, and the results in the ranking list were the average scores but not the highest ones; and there are more than 1,000 pieces of information on a single phone model. The data was calculated based on Antutu V8. If a single phone model has several memory capacity versions, the version of the highest score shall prevail. After the first place of the ranking list was taken by Mi 11 in January, the top position in February has changed hands again, and was also seized by the latest phone model iQOO 7 of a Chinese mobile phone brand iQOO.

In terms of hardware, iQOO 7 is equipped with Snapdragon 888 + enhanced LPDDR5 + enhanced UFS 3.1 as its standard configuration, a further upgrading of the "iron triangle" combination. iQOO has never ceased its efforts in improving the performance of its mobile phones. In general, each time iQOO issues a new digital model, its configuration will tell us what would be the combination with the strongest performance in the following six months. Therefore, iQOO 7 has won the championship on the performance ranking list of overseas Android flagship phones, with an average score of 727,730, which was about 20,000 higher than that of Mi 11 equipped with the same Snapdragon 888 processor. We may divine the whole from a part that iQOO 7 really boasts a tough performance.

With the No.1 position being taken by iQOO 7, Mi 11 was pushed to the No.2 position this time, with an average score of 708,990. Although equipped with the same 5nm Snapdragon 888 processor, Mi 11 still has a lower final score, which would, in fact, have little impact on its actual experience. It could only be said that all brands are quite different in performance tuning. iQOO 7 is more like an obsessive benchmarking monster, while Mi 11 is more balanced in overall performance, but both of them are very outstanding phones available on the market.

The more new phones equipped with Snapdragon 888 processor, the harder it is for you to find the long-standing flagship phones on the performance list.

What is the most interesting is that, although the top three phone models are all equipped with Snapdragon 888 processor, they have shown a gap of 47,600 in the average score. Such a big gap mainly results from the tuning preferences of different manufacturers. It is very common that some mobile phones will be optimized in terms of software for the benchmarking, but when it comes to the actual user experience, the gap among them is acceptable. For example, Samsung's phone models never win a very high score, but no one would complain about its user experience or its configuration.

Among the top ten of the ranking list of flagship phones, except OnePlus 8 Pro at the last, the other nine phones have all reached an average score of over 600,000, and as many as seven of them adopt the 5nm processor. OPPO Find X2 Pro released in the same period last year dominated the top of the ranking list with an average score of over 600,000 for several months, while this year, the average score has broken new ground to exceed 700,000. Apparently, mobile phones have been developing at an incredible pace.

Compared to the rapidly changing flagship phone market, the mid-range phone market is almost still in a stable state because of no release of new phones or processors, so there is little change on the ranking list. 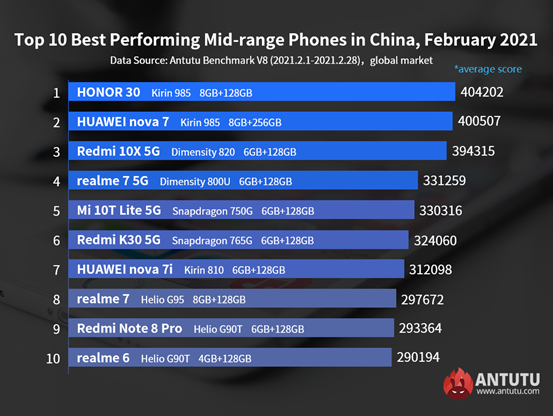 With this February considered, HONOR 30 has been ranked first in the performance ranking list of mid-range phones for five consecutive months, with an average score of 404,202 this month, over 2,000 higher than that in January, which is a normal fluctuation instead of any indication that Kirin 985 has been optimized. With more samples in the backstage database, the final score published each month will also change. Generally speaking, in the absence of new releases, HONOR 30 is expected to be the champion for six months in a row.

HUAWEI nova 7 with Kirin 985 processor still ranks No.2 on the ranking list this time. In February, its average score is 400,507 with a normal floating growth compared to last month, and this is also the fifth consecutive month when it ranks second on the list.

The newest model included in the ranking list of mid-range phones is realme 6. In the international market, realme has maintained a good performance with the launch of various new products, so it has occupied three places in the list of mid-range phones, but Xiaomi (including Redmi) has more phone models, taking up four places.

The above is the performance ranking list of overseas Android phones in February 2021. Flagship chipsets have entered the more advanced 5nm era processor, and the average scores have also reached the new height of 700,000. Given the current advances in technology, how would next year's processors be and what height the average scores will reach? We are all looking forward to finding out.