After a long wait, the performance of iPad Pro with Apple's self-developed M1 chip has finally been confirmed, and we finally have the first product in history to break the one million points in this June.

As usual, this iOS performance list is still based on Antutu’s V8 version, we should know that the new V9 version is generally higher than V8, but even on such a basis, the M1 iPad Pro still broke the one million points, which is very impressive.

It should be noted that figures in this ranking list were calculated from May 1 to May 31, 2021. The results in the ranking list are average scores instead of the highest scores, and thus more representative. 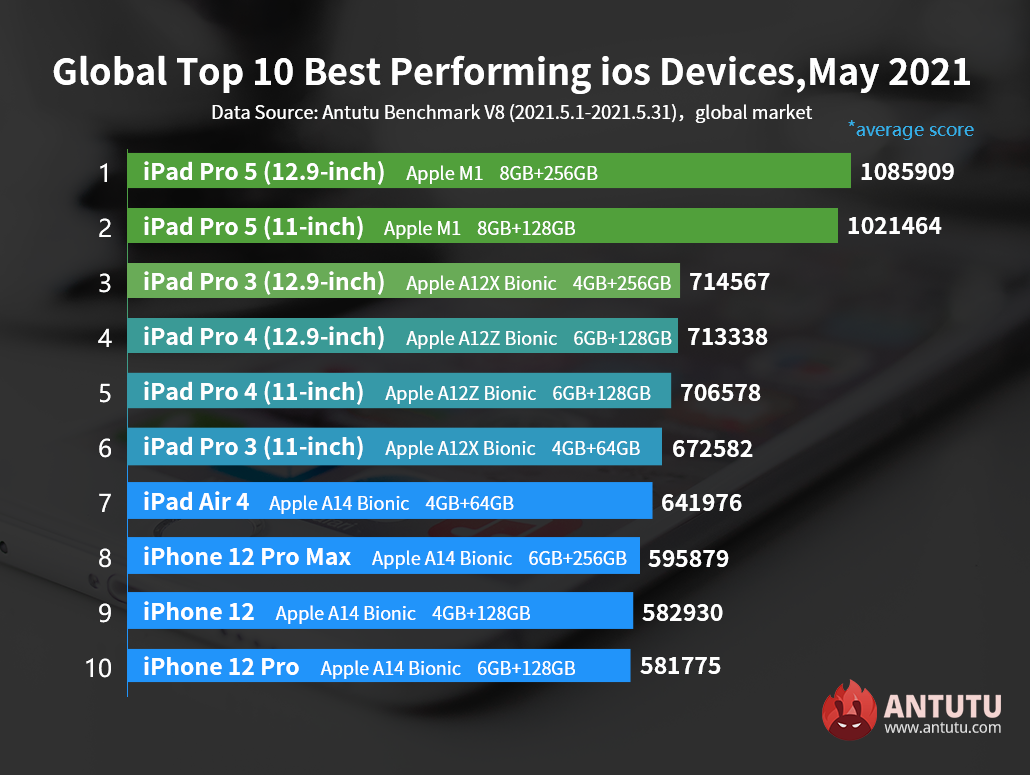 The score of the new iPad Pro is 370K + more than the old flagship, which is incredibly strong. However, there is no application of iPad OS ecosystem that can fully exert the strength of this unprecedented device.

Our background running score data is 8+256GB version, if there are enough 16GB data, WE believe that we can continue to exceed this score, Apple is super!

Both the products ranking No. 1 and No. 2 are changed with no exception, because Apple also brings the "small size" iPad pro with M1 chips. Except for the difference in screen size and material, there is no difference between 11-inch version and 12.9-inch version, both of them are equipped with Apple M1 chip.

From this list in May, the iPhone 11 series has completely dropped out of the performance list. It has been nearly two years after all. Every time when Apple updates its hardware, the performance is always way much better than the previous ones. The only one who can kill me is myself. - It's very appropriate to put it on IOS products.

The M1 iPad Pro has reached the top now. It is estimated that no products will surpass their scores in the next more than a year. The product cycle of iPad Pro(12.9-inch) with M1 chip and mini LED screen will also be unprecedented long.