Compared with the Chinese domestic market, the release of new overseas Android mobile phones in the first half of 2021 seems to be much less. At present, several leading brands in the Chinese mobile phone market are updating the flagships twice a year, while the overseas market is still sticking to the strategy of updating flagship once every year, which is a little monotonous for some Geek enthusiasts. Therefore, the flagship Android phone ranked on the global performance list are still the ones that released in Chinese market. More interestingly, before there is any update from overseas Android market, these Chinese flagship brands for the second half of 2021 will be launched again from August.

Anyway, AnTuTu has released the global Android phones performance ranking list in July today. Let's take a look at the specific data below. It should be noted that figures in this ranking list were calculated from July 1 to July 31, 2021. The results in the ranking list are average scores instead of the highest scores, and thus more representative. 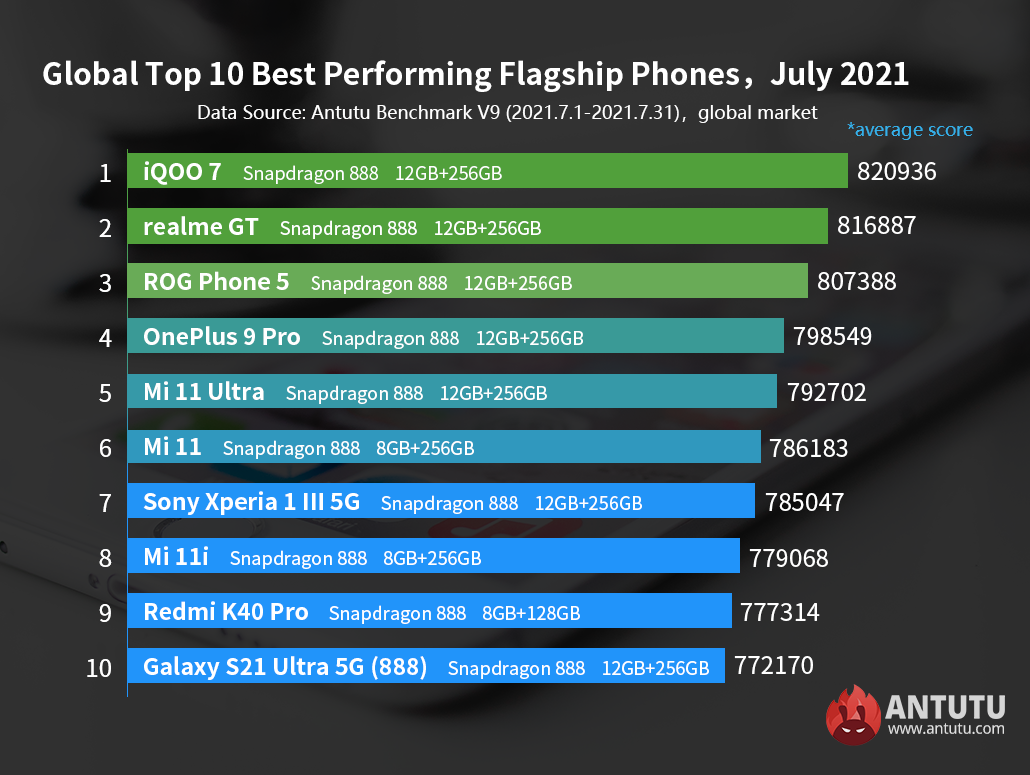 iQOO 7 once again appears at the top of the performance list of overseas Android mobile phones. This mobile phone is the second product equipped with Snapdragon 888 flagship chip, and it is still a combination of performance iron triangle (LPDDR5 + UFS 3.1). In addition, there is 120W super flash charger. Its configuration is still top-level even now.

Recently, iQOO has also given a notice that the new iQOO 8 series will be released on the 17th of this month. The biggest highlight is that the processor is upgraded to the Snapdragon 888 plus and the Samsung E5 screen, supports 2K 120Hz and LTPO. Although the screen does not adopt popular under panel camera, this strategy of achieving the ultimate appearance is also a research and development method, we believe it will also win the follow of some users.

As the most expensive product in the realme brand, realme GT has placed the expectation of many people from the beginning. After all, it once belonged to the ACE product line of OPPO, the performance is undoubtedly.

Good appearance design and strong configuration combination enable realme GT to win the second place in the Android Global Mobile Phone Performance List in July. Moreover, the cost performance of realme's mobile phone has always been very outstanding. In contrast, when Redmi's mobile phone needs to rush to purchase, products with the same configuration of realme can often be bought directly from the spot market.

The new generation of game phone King ROG Phone5 only ranked third this time. As a game phone, the performance of ROG Phone5 has always been the most representative. However, with the continuous progress of domestic Android phones, even if the positioning is not a game phone product, it can also be stronger than game phones in some places. The situation will be more and more tough for products launched for the game market in the future.

The release of new flagship phones in the second half of the year has just started. We have seen these above products on the Global Android Mobile Phone Performance List for many times. In particular, the top few are almost always the same. This is also the norm of Android mobile phones, and much better than the iOS performance list, because the rank of some Apple products may not change for a year after they are released.

The mid-range mobile phone side is still the same as the previous months, there is no big change, the specific running points and rankings are as follows. 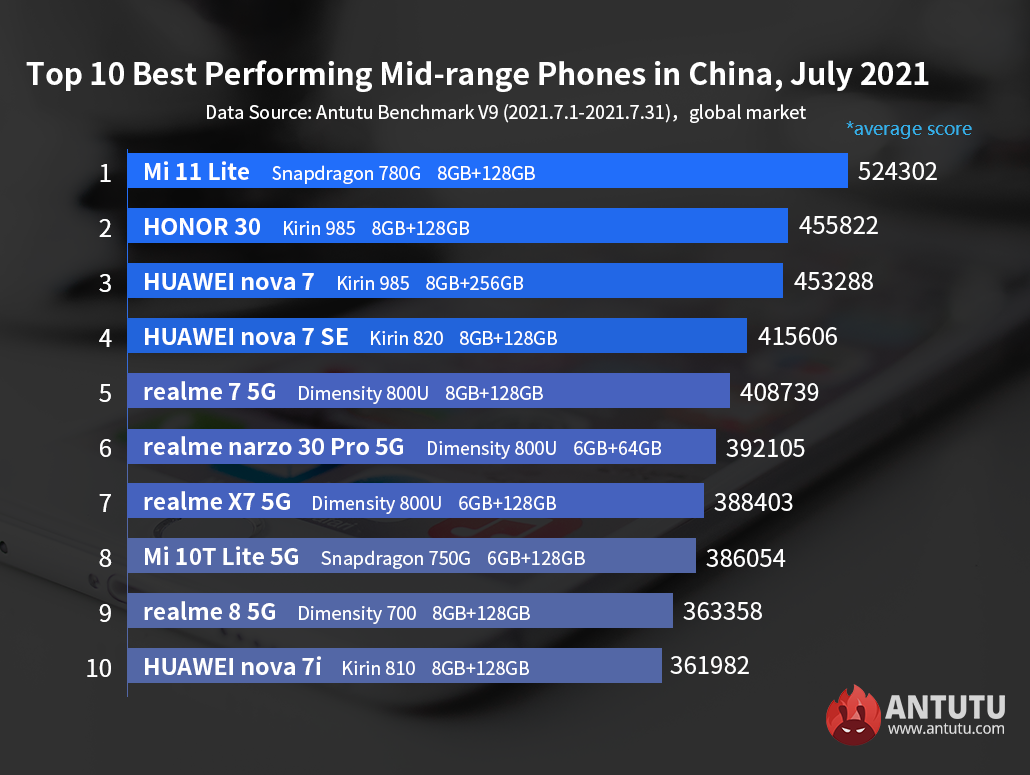 The second and third places are still HONOR 30 and HUAWEI Nova7, which are familiar to us. These two phones are both Kirin 985. Except for the slight difference in lens parameters, other configurations and even appearance design are identical, which is the market strategy of HUAWEI's two brands to synchronize the new phones.

There are not many new products coming out of the mid-range mobile phone market, because there is a shortage of mobile phone chips this year, and since the production capacity is not available, the only capacity must be given priority to the more profitable flagship chips, which also makes more sense.

In the second half of the year, there will be some new phones equipped with Snapdragon 778G released. Let's see if the HONOR 30 and HUAWEI Nova7 which occupy the second and third place all the year round can be squeezed out.

That's all for Global Android Performance Rankings for July 2021. See you next month.