The iOS performance list in April is basically the same as that of last month, with the same top 10 models. The ranking of some products has changed, but the three M1 chip-equipped iPad products still rank in the top three with a running score of more than one million points.

It should be noted that figures in this ranking list were calculated from April 1 to April 30, 2022. The results in the ranking list are average scores instead of the highest scores, and thus more representative. The scores in the list are mainly based on Antutu V9 and cannot be compared with the results of the previous versions. 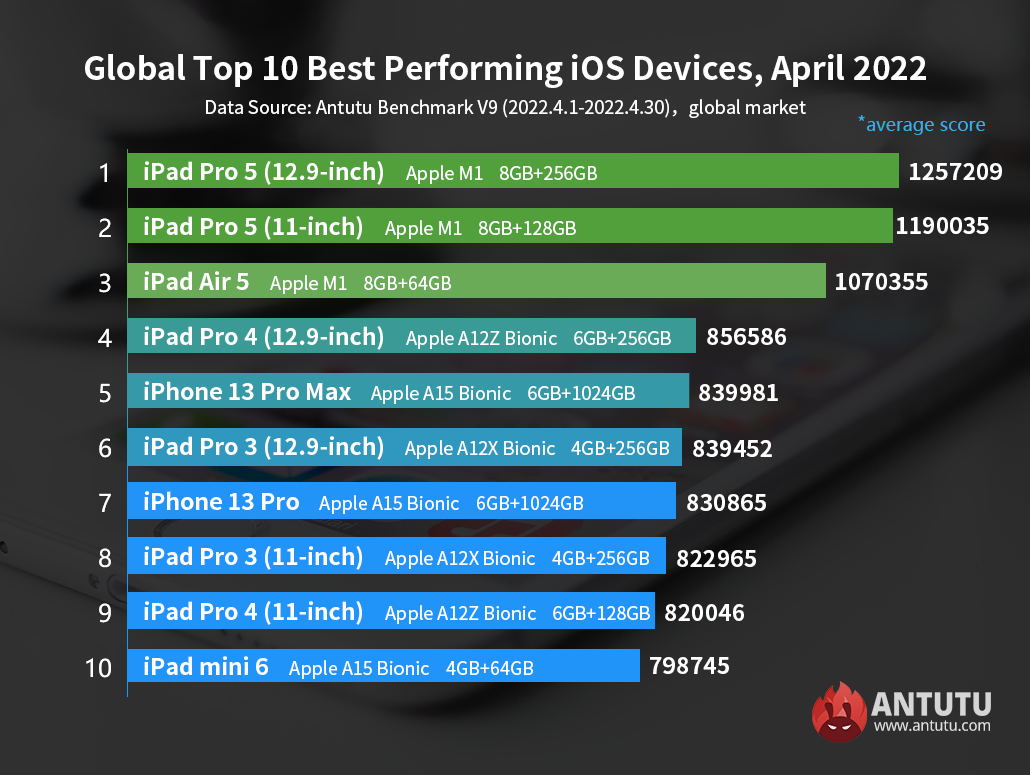 The main feature of the top three products is the M1 chip independently developed by Apple. The score of products equipped with this chip is much higher than the previous products, the iPad Pro5 with the top configuration can reach a score of about 1.25 million, which is about 400,000 higher than the fourth-ranked iPad Pro 4.

Until Apple brings the more powerful and faster (or larger) M1 Pro or even M1 Ultra to iPad models, these three iPad products will remain in the top three of the iOS device performance list.

It should be noted that the price of models equipped with M1 chip is relatively expensive. Even the cheapest iPad Air 5, which does not support a high-refresh screen, starts at CNY 4,399 for the 64GB version.

The new iPhone SE is relatively unknown compared to the iPad Air5, also released in March. Not only did it not make it to the iOS preference and performance list, but also the sales volume was not very good. Some time ago, the news that it would automatically restart was also exposed, which further affected this phone greatly. It seems that even the popular Apple brand needs to think carefully about its marketing strategy for the mobile phone market.

That's all for the iOS Performance list in April 2022.