In the first half of 2022, the Android flagship phone market is essentially a battleground between the Snapdragon 8 Gen1 and Mediatek Dimensity 9000. Two MediaTek Dimensity 9000 models made it into the top 10 list of flagships in June, which is already a big win for MediaTek compared to last year's Dimensity 1200.

However, this year has been a different story, with MediaTek keeping pace with Snapdragon. In the first half of the year, the Snapdragon 8 Gen1 used Samsung's 4nm process, the market feedback was not very good due to the heating problem, so it gave Dimensity 9000, which used TSMC's 4nm process, an opportunity to win a good market reputation. Then in the second half of the year, Qualcomm released the Snapdragon 8+ Gen1, MediaTek also brought the Dimensity 9000+ a month later. The competition between the two companies became more and more intense.

Let's take a look at the specific data of the June ranking list below. It should be noted that figures in this ranking list were calculated from June 1 to June 30, 2022. The results in the ranking list are average scores instead of highest scores, and thus more representative.

Gaming phones have always been very highly equipped, the manufacturers don't care too much about the ordinary user and are only aimed at gamers, so there is a lot of market-oriented design in the appearance and internal configuration of the phone. The Red Magic 7, the first Snapdragon 8 Gen1 gaming phone, has been at the top of the global Android flagship phone performance list since its release in February. The brand also previewed the new model a few days ago, we believe that the Red Magic gaming phone with the Snapdragon 8+ Gen1 processor will be able to reach over 1.1 million running points.

Another highlight of the Red Magic 7 is that it features a 6.8-inch AMOLED screen with a resolution of 2400x1080p, supports up to 165Hz refresh rate, 720Hz touch sampling rate, tripod pixel arrangement, and DCI-P3 100% wide color gamut, which is crucial for gamers.

What incredible features will be added to the new Red Magic gaming phone in the second half of the year? We'll wait and see.

In terms of core processor, the Vivo X80 is equipped with MediaTek Dimensity 9000 processor, with LPDDR5 memory + UFS 3.1 flash memory, support for personalized GPU parameter tuning, and the built-in VC soaking plate covers an area of 4285mm², which is the largest VC soaking plate in Vivo, and a 4500mAh battery with support for 80W wired flash charging, extending battery life by 25%.

However, Motorola has been acquired by Lenovo, and Lenovo has a gap of several years in the mobile phone market. So although the phone has a high configuration and low price, there may be problems with the system. People can buy if they don't mind that, after all, as an international manufacturer, Lenovo's after-sales service can be trusted. But as a mobile phone sold online, offline maintenance could be more troublesome.

The top 10 flagship rankings include two new models with the Dimensity 9000 processor. Xiaomi is always well equipped and achieving such a result is to be expected, but it is very impressive that the Vivo X80 is in second place with over 1 million points, and with the starting price of the device under CNY4,000, it is no wonder that demand is already beginning to outstrip supply in the market.

Next, let's take a look at the ranking of the sub-flagship phones. 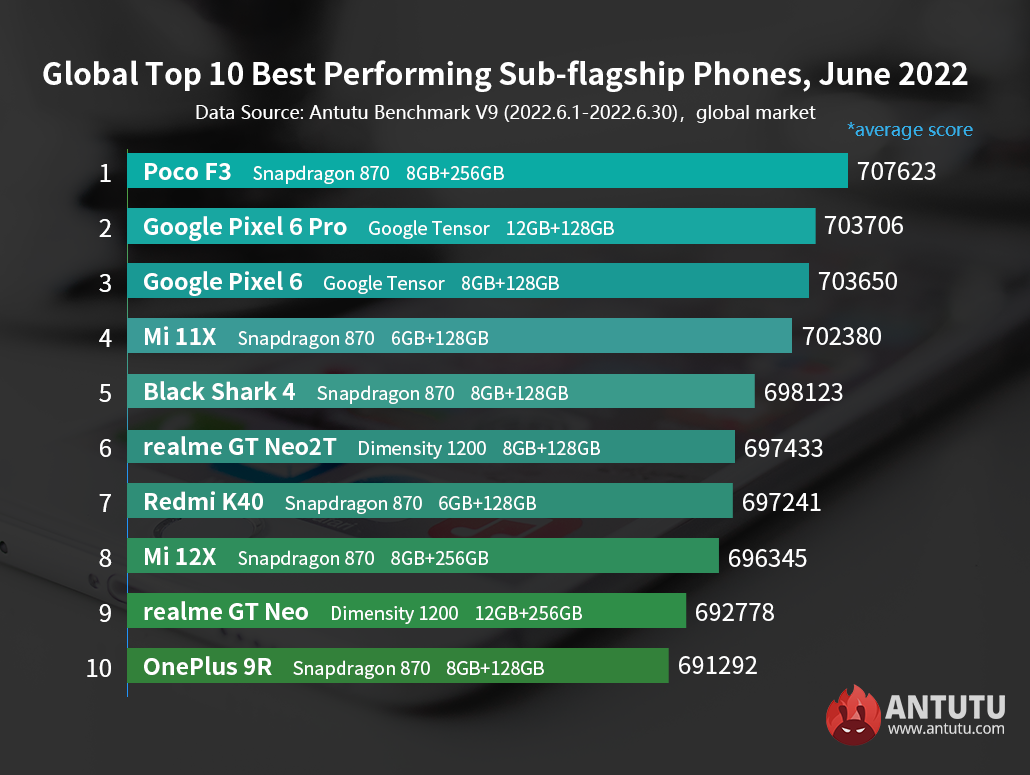 The Chinese sub-flagship market is mainly using the Dimensity 8100 processor, compared to the global market where the Snapdragon 870 is still mainly used. MediaTek's next step after winning the Chinese market will likely be to focus on the global market. With better performance, better power consumption, and a lower price compared to the Snapdragon 870, MediaTek's strength will move even closer to Qualcomm Snapdragon if it increases Dimensity 8100's market share globally.

The POCO F3, the top-ranked sub-flagship, is the Redmi K40 series in the Chinese market and looks the same, except that the rear case of the phone has a clashing color design. The phone has also been a high hit on Chinese social media platforms for a while, with many people finding its rear case design a little better looking than the K40 standard version.

The K50 series, the renewal product of the K40, has been released in the Chinese market for a long time, and there are currently three models: the K50 Gaming Edition, the K50, and the K50 Pro. Redmi is also rumored to be bringing the K50 Ultra, which will be upgraded to a Snapdragon 8+ Gen1 processor in the second half of the year and is believed to have higher running scores.

Two of Google's phones, the Google Pixel 6 series, came in at number two and three respectively in the sub-flagship rankings. As the standard and Pro versions, the configuration of both phones is largely the same, with both powered by Google's own Google Tensor processor. The Tensor processor is customized for Pixel's computational photography function, providing Pixel users with features they are familiar with, while also being further optimized. This strategy is somewhat similar to Apple's self-developed M and A series chips. Because the chip is fully self-developed, it has more manageable scalability and usability that third-party chip manufacturers cannot match.

In terms of score data, the overall power of Google Tensor is probably on the same level as the Snapdragon 870, which is adequate for the current mobile market, but still falls short of the top chips. We are curious to see what upgrades will be made to the Google Tensor in the next-generation Google Pixel 7 series, and what the performance scores will be like.

The mid-range ranking is even less surprising, with the Snapdragon 778G processor from last year still being used. Qualcomm has already released a new generation of Snapdragon 7 processors and the first model is already on sale, but overseas markets are still using last year's processors, the overall update is too slow.

Although the processor is still dominated by the Snapdragon 778G, the top three models have all changed from the last time. iQOO Z5 was released in September last year and is a phone with an LCD screen, which is rare in the current mobile phone market.

However, the overall appearance and configuration of the device are not much of a highlight, and the Snapdragon 778G is also a year-old chip with very average performance. It is not recommended unless the user is just using it for daily communication and watching videos, and has no requirements for the performance.

The other two phones from Realme are known for their value for money, and another highlight of the Realme GT Master is the rear case design, which is one of the few recognizable looks in a Realme phone.

Users who know about mobile chips may have noticed that none of the thirty phones on this list are powered by the Samsung Exynos processor. Huawei's Kirin processor disappeared from the list because of an unresolved ban issue, but the Samsung Exynos is due to poor performance, and even Samsung's Galaxy phones are no longer powered by Exynos processors this year. The Android performance list will probably be entirely dominated by Qualcomm Snapdragon and MediaTek Dimensity series in the future.

That's all for the global Android phone performance list in June 2022. The first new Snapdragon 8+ Gen1 powered Xiaomi 12S series has been released and will be followed by a large number of new models from other brands. The next step will be to see how the Dimensity 9000+ responds and how its performance is. The Android phone market competition will be even more intense in the second half of the year.