The era of smartphone ray tracing has officially arrived with the release of the Dimensity 9200 and Snapdragon 8 Gen 2 in November. However, flagship phones equipped with these chips have not yet made it onto the Android performance ranking list of AnTuTu, so November's rankings are pretty much the same as October's. With the launch of new flagships, there should only be a very small number of phones powered by the Dimensity 9000+ and Snapdragon 8+ that will make it into the top 10 of December's list. 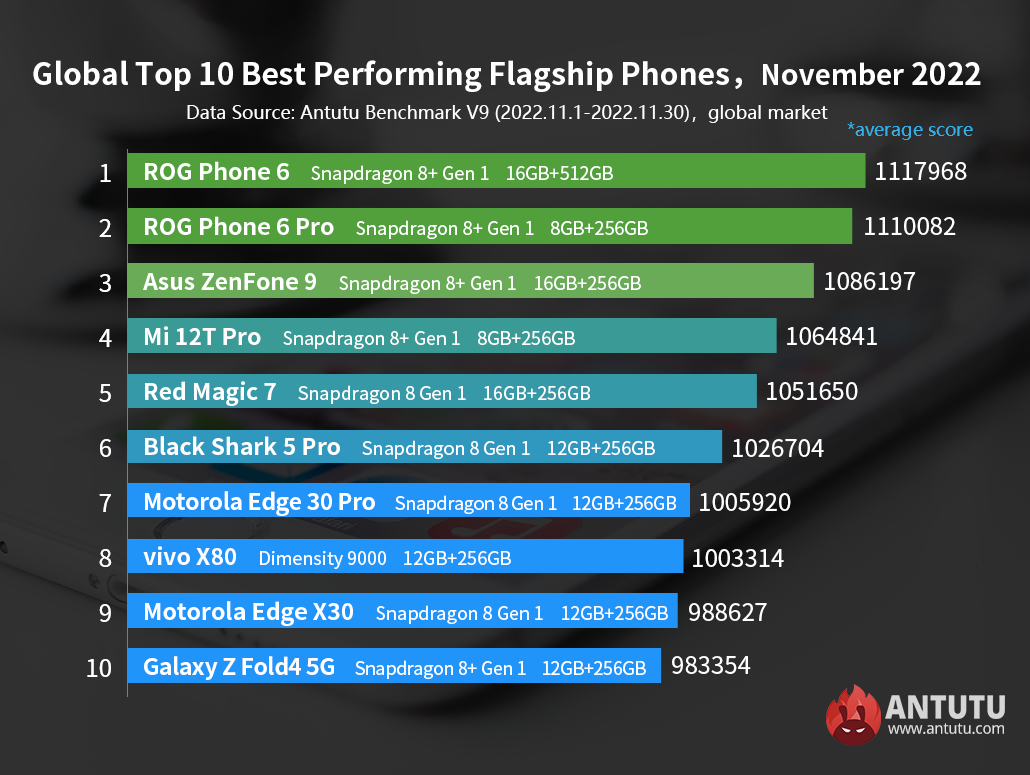 The ROG gaming phone is again, unsurprisingly, in the top two of the flagship phone list. The ROG Phone 6 Dimensity Edition does not appear on the list, probably because the number of runs failed to meet the minimum requirements.

The appearance of ROG Phone 6 has not changed much compared to the previous generation ROG Phone 5s. The weight of the phone is not very convenient for daily use, but it is not considered a disadvantage of a gaming phone. The left side of the phone has a USB-C port for charging during game play, which is very much in line with the habits of gamers.

The ROG Phone 6 is the quintessential flagship gaming phone, with 16GB of RAM and a Snapdragon 8+ chip that allows it to run all Android platform games stably, and a 3.5mm headphone jack at the bottom of the phone that gives it an added advantage in FPS games.

The ROG Phone 6 Pro came in second place with a lower average score than the standard version. This is largely due to the fact that most ROG Phone 6 Pro users opted for the 8GB+256GB storage combination. In fact, the ROG Phone 6 Pro has a stronger cooling configuration and a cooler appearance.

In third place is the Asus ZenFone 9. This is an impressive ranking for a small, non-gaming phone. The best feature of the Asus Zenfone 9 is that the screen is only 5.9 inches, retains the 3.5mm headphone jack, and supports IP68 water and dust resistance. In terms of core configuration, Zenfone 9 is equipped with Qualcomm Snapdragon 8+ processor, 6/8/16GB LPDDR5 memory, 128/256GB UFS3.1 flash memory, 4300mAh battery and 30W fast charging, and supports Wi-Fi 6E, Bluetooth 5.2, and NFC.

Clearly this list is a big win for ASUS. The top three phones are all ASUS products.

At the top of the sub-flagship list are still phones with the Dimensity 8100. The Snapdragon 870, which has been released nearly two years ago, also still appears on the list.

Mi 12T is a series launched by Xiaomi in the second half of the year for the global market. Mi 12T Pro is ranked fourth in the flagship phone list and the standard version is ranked first in the sub-flagship phone list. Mi 12T has the advantage of an additional 108 MP main camera than other phones on the list. In addition, the Mi 12T series inherits the excellent design of the Xiaomi 12 series, and the core configuration and imaging capabilities are at the top level in the same price range. The only controversial thing is the MIUI which takes quite a long time for many people to get used to.

In second place is the realme GT Neo 3, which is also the second phone equipped with the Dimensity 8100. As a young phone brand, realme understands the appeal of the phone's appearance to young users, so the realme GT Neo 3 comes in a COF package with narrow bezels on all sides, and there is also a version co-branded with well-known social media.

The powerful performance of realme GT Neo 3 comes from its combination of Dimensity 8100 chip + LPDDR5 memory + UFS 3.1 flash memory. In addition, the realme GT Neo 3 is equipped with dual stereo speakers and X-axis Linear Motor for a better vibration experience.

The most impressive feature of the realme GT Neo 3 is the 150W charging speed, a charging system that is much bolder than Apple and Samsung and doesn't seem to have brought negative press to realme so far.

The Redmi K50i is a phone aimed at the Indian market. Its appearance is not too eye-catching, but its performance is strong enough. The top ten spots in the mid-range phone list are still occupied by the Snapdragon 778G. The Snapdragon 778G remains the number one choice at this price point due to the average performance of the Snapdragon 7 Gen1. MediaTek has also recently launched the Dimensity 1080 to try to expand its market share, but so far with little success.

Hopefully, cell phone manufacturers and chip makers will regain attention to the mid-range phone market, which is in great need of fresh blood.

That's all for the global Android phone performance list in November 2022. The competition for new flagship phones on the December and January lists should be very fierce. Let's wait and see what the next month brings.