The flagship new products of major mobile phone brands in the first half of 2021 have been updated so far. Some brands have even updated mid-range and entry-level machines. The update iteration speed of the mobile phone market far exceeds our imagination. According to the current situation of the new machines on the market, we can finally make a more detailed performance comparison summary in this list. Because Antutu just updated the V9 version, the overall score has risen. In addition, the score of V9 cannot be compared with the score of the V8 version.

The statistical cycle of this data is from April 1st to April 30th, 2021. The results in the list are the average results, not the highest results, and the statistics of a single model exceed 1000. The data is based on AnTuTu V9 version. If a single model has multiple storage capacity versions on the list, the version with the highest score will prevail.

iQOO 7 entered our performance list in the first month of its release, and won the first place in one fell swoop. This time iQOO 7 also successfully surpassed ROG Phone 5, which is known as the strongest gaming phone, and once again won the first place with a high score of 821,324.

Following the Mi 10 Ultra, Mi 11 finally brought this year's Ultra product. As the super-large model of Mi Digital flagship series, Mi 11 Ultra can be said to carry the accumulation of various aspects of Xiaomi's technology for many years.

The core hardware of the Xiaomi Mi 11 Ultra is the same as the standard version of the Mi 11, both are a combination of Snapdragon 888 + UFS 3.1 + LPDDR5. The focus of the upgrade is on the rear lens. The world's first Samsung GN2 sensor is close to 1. The inch CMOS size has greatly improved its camera capabilities. This may be Xiaomi's best camera phone in history, and it also brings the tonality of Xiaomi's products to a whole new level.

In the past, as long as ASUS gaming phones were updated, they would often dominate the performance list for several months, but this time is different. Although ROG Phone5 has strong appearance and performance, it still shows the final score. Lost to iQOO 7 and Xiaomi 11 Ultra, it can be seen that the new phones on the market now have almost the same hardware configuration, and there is not much difference in the final score presentation. As a category of mobile phones, gaming phones do It is more about the adjustment of appearance, heat dissipation, and large battery. The overall improvement has little effect on the score.

Looking at the top ten flagship phones in the entire performance list, the top eight are equipped with Qualcomm’s flagship processor Snapdragon 888 this year, the last two are from Huawei’s 5nm flagship Kirin 9000, and the last one is in the first half of last year. For the flagship Snapdragon 865, their score changes are also very obvious, and the changes of the times are shown by the numbers we are most familiar with.

In addition, four of these ten mobile phones are Xiaomi phones, and the rare two generations of flagships of Xiaomi 10 Ultra and Xiaomi 11 Ultra are in the same class. It can be seen that in terms of performance configuration, Xiaomi's phones can withstand a natural year of transition. of. 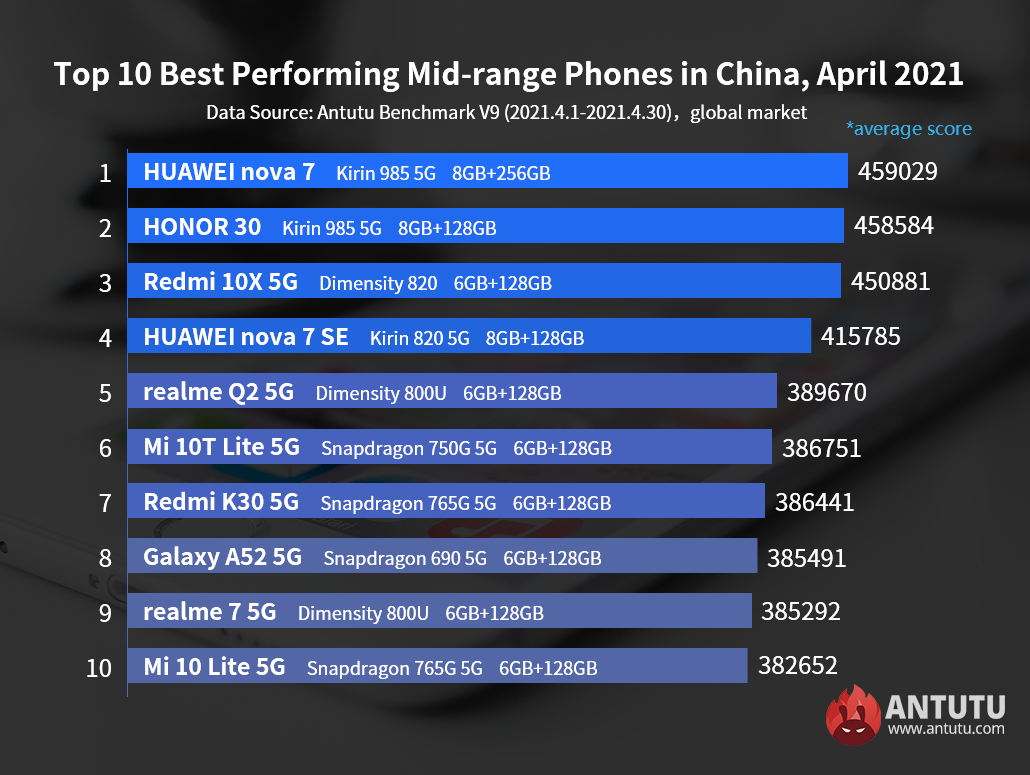 Those who frequently check our ranking list should also be aware that for several months in a row, the number one and number two on the mid-range mobile phone performance rankings have been beating back and forth between the two phones. nova 7 or Honor30. The average score difference between the two phones is also very small, because the two phones can actually be regarded as the same model of different brands. Therefore, no description is given here.

The above is all the content of the overseas Android mobile phone performance list in April 2021. From May to September, there should be no major flagship products released, mainly the update of some low-end products. It is expected that the list will not undergo major changes. We will see you next month.