Since the release of M1 chip version of iPad Pro, the two new products of different sizes have significantly exceeded Apple's previous flagship product iPad Pro4 series with scores of more than 1 million. It is expected that the top two products in iOS device performance list will always be them in the following twelve months, the changes in the list will also be very small.

Let's take a look at the specific ranking and scores. This iOS performance list is still based on AnTuTu V8 version.

It should be noted that figures in this ranking list were calculated from July 1 to July 31, 2021. The results in the ranking list are average scores instead of the highest scores, and thus more representative. 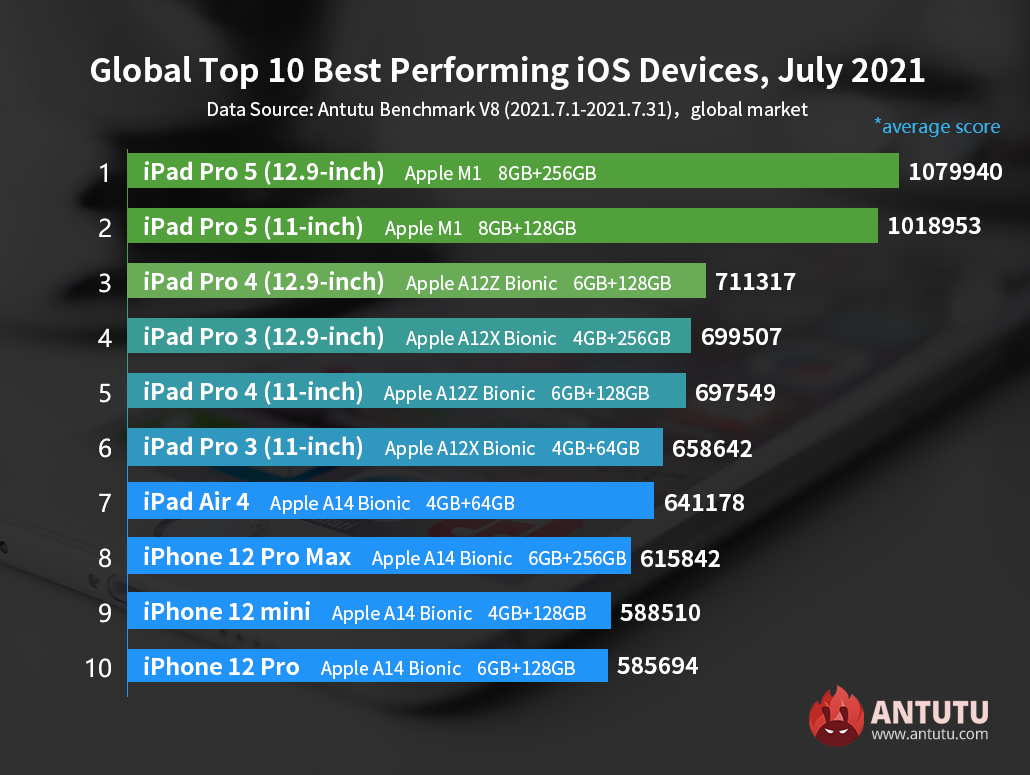 Although the average running score is lower than that of last month, the latest generation of M1 chip iPad Pro continues to beat the old flagship iPad Pro4 with 1,079,940 points. There is no doubt that it is the strongest tablet computer at present (and possibly the strongest in the following year). If you have enough budget, the iPad Pro 5 is definitely your best choice.

The iPad Pro 5 (11-inch) is the iPad Pro 5 model with smaller screen size, so the comprehensive score is almost the same with the 12.9-inch version. The average running score of this product is 1,018,953. From the running score data we can see that the storage space of this product is 128GB, which is 128GB less than the 12.9-inch version, and that is the biggest difference in scores, the performance of the two products is the same.

This product is the old flagship of the previous generation, equipped with Apple's A12Z processor. Of course, it is still powerful enough at present, but with the first two products having a more powerful M1 chip, it can only be ranked behind them.

In addition, it is said that the upgraded version of M1 chip M1X is expected to appear on the new MacBook Pro. How will Apple upgrade this strongest chip? We will see.